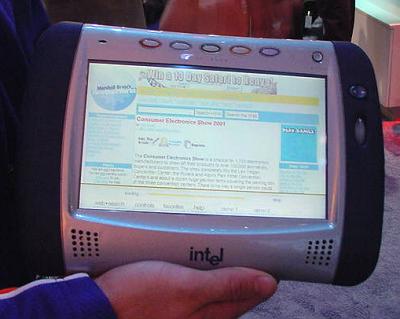 Intel is at CES in a big way! With a huge booth and a flotilla of products, Intel is determined to show that they are not just a chipmaker. Among the highlights are:

This device is a wireless add-on to your PC. Using Intel's Anypoint wireless home network, the tablet is an extension of the desktop. It relies on the processing power and Internet connection of your PC to work properly. What it gives you is mobility and the ability to have two people surfing the Web from the same PC. The large color LCD is a touchscreen. The Web Tablet features a complete Web browser and several other applications.

Intel has introduced several wireless devices including a mouse, keyboard and gamepad [pics 88, 89]. All of these devices use the same base station, which can support up to eight devices. A prototype of a wireless e-mail device was shown at CES. Incorporating a long narrow LCD and a small keyboard, this device allows you to check e-mail while away from your computer or while someone else is using the computer.

On the computer front, Intel demonstrated the latest Pentium 4 chips and announced a free download software bridge for their networking products. The software bridge enables Intel Anypoint wireless networks to talk with a phoneline or Ethernet network.