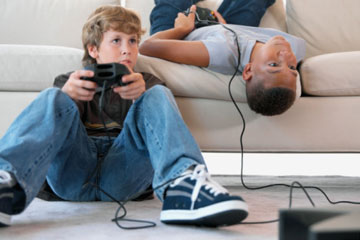 Through your controller, you are Link, the valiant adventurer, navigating a virtual icy cave in search of a coveted Heart Piece. In order to uncover the prize, though, you must figure out three of the cave's puzzles consisting of several large blocks of ice. After scratching your head in bewilderment -- and maybe even letting out an exasperated sigh -- you move the blocks in the correct north, east, south and west combinations and hear the sweet sound of victory. You've mastered the challenge, and at last, the Heart Piece is yours!

Solving a difficult video game puzzle is not only exhilarating, but the hard work and knowledge it takes to succeed can make you feel pretty smart, too. The games in the "The Legend of Zelda" series aren't the only ones that can teach life skills like perseverance and critical thinking. Competitive sports games like "Madden NFL" and puzzle-heavy games like "Portal 2" teach kids the importance of good decision-making, planning and communicating effectively. And that's only where the learning begins -- there are numerous video games that are capable of teaching much more.

However, a note for parents: Be careful to pay attention to the Entertainment Software Rating Board's (ESRB) rating of a game before you allow your child to play it. Like movie ratings, the ESRB reviews and rates games according to their content. The ratings are:

Click over to the next page to find out which games can improve kids' social interactions and problem-solving skills.

The Importance of Social Skills and Problem-solving 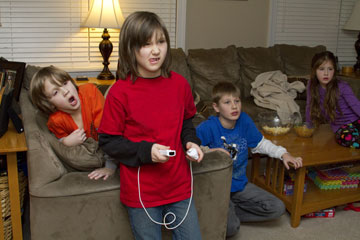 For those waiting for their turn, video games are sometimes a spectator sport.
Jena Cumbo/Taxi/Getty Images

Social skills are necessary for human beings to function successfully in society, and many of these skills are learned during childhood through play. For example, some video games require children to alternate use of the controller when there are too many players present, teaching the value of sharing and taking turns. Racing games like Nintendo's "Mario Kart" series and sports games like "Madden NFL" are often played in pairs or small groups, requiring kids to play fairly and share controllers.

Other games are centered on the importance of team work and setting goals. Rated T by the ESRB, "World of Warcraft" is a massively multiplayer online role-playing game, or MMORPG. Thousands of players exist in the world at any given time, and the game encourages virtual teams to meet and work together to achieve a common goal. Since a single player's actions can affect the entire team, the game helps teens learn how to work and collaborate as part of a group and deal with both success and failure -- whether the outcome of a particular mission is a result of others' actions or their own.

Problem-solving is a central theme to many video games, and kids of all ages are taught to recognize patterns and strategize in order to win. For example, Nintendo's "The Legend of Zelda" series includes many puzzles and complex levels that challenge players. When Link gains an item, he must then use it to advance to what were previously inaccessible areas of the game. Many of the puzzles in each game also employ these items. Obstacles are often put in the way of achieving a goal in "Zelda," which is arguably similar to many situations kids face in real life, like working hard to learn a difficult mathematical concept in order to succeed on a test at school.

Games like "Portal 2" (rated E10+ by the ESRB) keep the mind sharp and alert through hours of unique, mind-bending puzzle solving. This game emphasizes the importance of navigating a new environment carefully and recognizing and utilizing the materials available in a game. These problem-solving video games teach kids the importance of patience and perseverance by forcing them to think cognitively when trying to master a challenge. By working hard and choosing not to give up, kids achieve an "a-ha!" moment, where they realize the solution to a problem and feel smart for doing so. In this way, games like "Portal 2" not only help stimulate a child's mind, they also boost confidence.

Learning that Actions have Consequences

In many of today's most popular video games, players are forced to strategize and demonstrate critical thinking, and their actions often directly affect the outcome of a game. In almost any role-playing game, users can breeze through levels -- often in the form of dungeons, or enclosed spaces with either a random or predetermined number of enemies -- without veering off a set course. However, players can also choose to go off track by completing side missions and exploring unknown territories. SquareEnix's "Dragon Quest" series (where most games are rated E10+) allows users to tailor thier play according to the moral decisions they make. Games in the "Dragon Quest," "Final Fantasy," and other popular role-playing series allow players to navigate vast, open worlds independently through exploration. These games place great emphasis on battle preparedness, but players can actually choose to run away from these conflicts -- though avoiding them will sometimes be met with consequences later.

Similarly, "The Sims" games are designed to let players navigate a virtual world while also choosing what happens to their characters. Everyday interactions in personal relationships can add up, and real-life choices like if a player should go to work each day affects the lives of the characters. If you forgo work too often, you'll be fired, and you'll have to cut costs and forgo luxuries like new furniture. On the other hand, if you arrive on time every day, you'll likely get a promotion or a new job, allowing you to buy nicer things for your virtual self and family.

It might sound mundane, but these games can be stressful, as managing work, family and home upkeep can be difficult. In fact, a few rounds of "The Sims" may even cause your child to think about all the work you do that often goes unnoticed and unappreciated! There are many different versions of this series across multiple platforms targeting players of different ages -- from "The Sims Pets" to "The Sims Medieval" -- but the basic concept remains the same.

Of course, there are downsides to video games, and we're not suggesting that your kid will get more out of a video game than he will, say, playing baseball outside with friends. But there are demonstrated benefits to gaming, and as long as your child maintains a healthy balance between real life and the virtual world, there's no reason he can't learn a thing or two while sitting with a controller in front of the TV.

Does This Video Game Make Me Look Fat?

Video games are commonly criticized as being a gateway to a sedentary lifestyle. While sitting excessively in front of the television or computer screen can be bad for anyone's health, gaming in moderation is an enjoyable hobby and can even encourage kids to get off the couch. Games like Wii's "Wii Sports" and the Xbox 360's "Kinect Sports" focus on physical activity and make exercising fun.

Is the Internet making children less polite?
How important is technology in education?
5 Positive iPad Apps for Kids