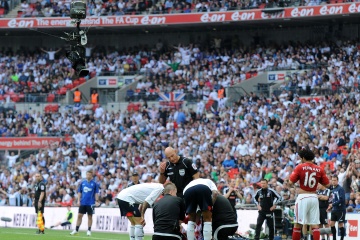 Skycam can get down close to the action on the field.
© Sam Bagnall/AMA/Corbis

It swoops and dives like an enormous flying arachnid from your worst nightmares. But it's not a black widow that grew up too close to a nuclear power plant. Instead, it's a rather ominous (and still spider-like) camera contraption dangling in the air, chasing football players as they run for their lives (or a touchdown).

It's Skycam, the original flying camera, and you've probably seen plenty of footage created by this radical-looking gizmo. Skycam is a wire-flown, remote-controlled camera, and it's been zooming around stadiums and other venues for years now, providing fantastic camera views that would otherwise be nearly impossible to achieve.

With Skycam, people who watch American football on television have a bird's eye view just above and behind the quarterback. Compared to old sideline views, Skycam is almost like being in the huddle.

Not sure if you know exactly what Skycam is? If you've ever watched a major sporting event on television, such as NFL Sunday Night Football, you may have intermittently caught a glimpse of an airborne device gracefully floating above the field, hanging from multiple ropes. That's the Skycam system.

Skycam offers a video-game-type view that leans heavily on modern technologies. Without fast computers and user-friendly software, as well as some really strong guide ropes, the whole setup would be unfeasible.

But thanks to smart engineering, Skycam is now nearly a staple of broadcasting for special events. Keep reading and you'll see how video cameras grew wiry wings and took to the air. 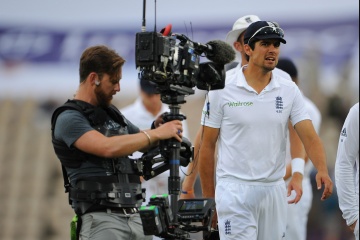 Skycam mostly gathered dust until the XFL debuted in 2001. The XFL was an offshoot football league launched by Vince McMahon, of World Wrestling Federation fame. With Skycam, the XFL immediately had a fresh, dynamic look that set games apart from traditional football game broadcasts.

Although the XFL shuttered after just one season, the NFL took notice of the extensive Skycam coverage. Starting in 2002, Skycam became a staple of Sunday Night Football, and since then has been used for all sorts of events.

Winnercomm bought Skycam in 2004. And in 2009, Outdoor Channel Holdings (which operates The Outdoor Channel) purchased Winnercomm. The Skycam patent expired in 2004, so other companies have developed competing products, such as CableCam. Because Skycam was first and most famous, though, many people refer to all cable-mounted camera systems as Skycams.

Regardless of the brand, these cameras aren't cheap to deploy. Setting up Skycam costs tens of thousands of dollars. That's why you most often see Skycam coverage during major events that are sure to draw a large number of viewers (and thus, revenues to help pay for the Skycam).

Now the system is used often for the Olympics, college football, NFL games and NASCAR and IndyCar races. It's also seen plenty of action during NBA and NHL games, as well as golf. Deep-pocketed musicians use Skycam for concert coverage, and all sorts of directors want Skycam as they shoot feature films. 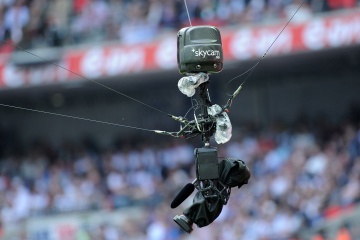 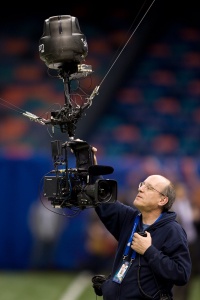