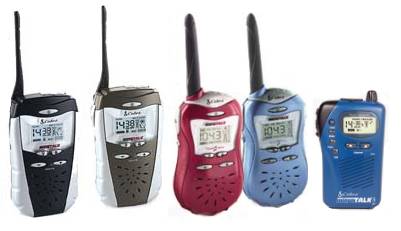 Before cell phones, the main options for on-the-go communication were two-way radios. You could hook up a citizens band radio in your car, or get a pair of portable walkie-talkies for short-range communication. Cell-phones expanded on this technology, to offer greater coverage, and duplex voice channels.

But even with the advent of cell phones, two-way radio is still a very popular communication tool. For certain applications, in fact, portable two-way radios have a number of advantages over cell phones.

Cobra Electronics manufactures a variety of radio communication products. At the Consumer Electronics Show, they showcased their microTALK™ line, an affordable collection that make use of the family radio service (FRS). The FRS is a section of the citizens band frequency range set aside in the United States and Canada for short-range radio communication. Anyone with an FRS radio can use this frequency range in these countries, at absolutely no cost. Cobra microTALK radios are an ideal way for families to keep in touch when they are less than a few miles away -- at the mall or amusement park, for example, or just around the neighborhood.

Since you don't need to subscribe to a service or pay for airtime to use them, FRS radios are much more economical than cell phones. Cobra's models are designed with the average consumer in mind -- the units are compact, affordable and easy to use. Cobra has also given special attention to the appearance of the radios. The new microTALK units feature removable SNAP™ faceplates in a variety of colors and designs.