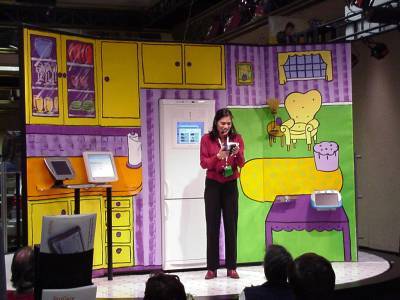 MicroTouch Systems, Inc., founded in 1982, has become the world's leading manufacturer of computer touchscreen technology. They have recently joined with 3M, one of the top technology companies in the world. MicroTouch makes two different types of touchscreen -- analog capacitive and resistive membrane. Both technologies use thin glass panels that are positioned between a CRT/LCD display and the user. The touchscreen is so discrete that most people don't realize they're not actually touching the display.

Capacitive screens read touch by interpreting disturbances in a voltage field. A low level electrical current is applied from all four corners of the screen, creating a uniform voltage field. When you put your finger on the screen, you draw from the electrical current, and the touchscreen controller recognizes a touch. This draw of electricity (your finger touching the screen) pulls from each of the screen's four corners. The voltage -- the electrical potential difference, or "electrical pressure" -- changes at each corner, in proportion to the distance between the corner and the point of contact. With this information, the touchscreen controller can calculate the exact coordinates of the touch. Touchscreen software then interprets these coordinates, so the computer application can register the touch as a mouse click.

Resistive touchscreens work when pressure is applied to the screen surface. The touch makes a connection between two conductive coated screen layers, separated by non-conductive spacer dots. When the user applies a finger or stylus to the screen, it pushes the conductive-coated polyester top sheet down to the conductive-coated glass layer. This completes an electrical circuit between the two layers at that particular point. The system relays the point of the connection to the controller and a touch is recognized.

Touchscreens have a number of unique qualities that are useful in a wide range of applications. These benefits include:

Touchscreen technology is extremely easy to use.
Photo courtesy MicroTouch

In addition to these applications, MicroTouch screens work well for gaming systems, informational kiosks, and cashier stations. Some screens also capture writing, which is useful for all sorts of business applications. For example, doctors can use these touchscreens to approve prescriptions online, saving their patients time and energy.

MicroTouch sells capacitive and resistive screens that can be integrated with computer displays, as well as pre-assembled touchscreen monitors. To learn more about touchscreen applications, and to see MicroTouch's full line of products, check out MicroTouch.com.