by Chris Pollette
Prev NEXT
2 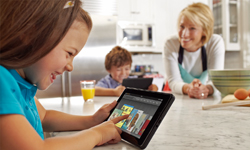 Amazon's new full-color tablet, the Kindle Fire, launched in late 2011. Its $199 price tag may shake up the tablet market, but the Kindle Fire sells at a loss for the Internet retail giant.
Courtesy Amazon

As if Amazon's slate of new electronic readers wasn't enough by itself, Amazon thrilled the tech world by releasing its first tablet computer in 2011, the Kindle Fire. Running a custom version of the Android operating system, the Kindle Fire has a dual-core processor and a display supporting 16 million colors [source: Amazon]. Some believe that the Fire will take over a large share of the Android tablet market.

The initial price of $199 for the tablet undercut market leader Apple's most inexpensive iPad by $300. But Amazon takes a loss on each Fire it sells. Industry analyst IHS iSuppli dissected the device and determined that each unit costs $201.70 to manufacture [source: Epstein].

The tablet runs a proprietary version of the Android operating system, but Amazon has an advantage that most of those manufacturers don't: The retailer offers free cloud storage for digital media purchased from its stores, so Kindle Fire users can access their Amazon-bought movies, books, music and more for free -- assuming they have a wireless Internet connection nearby -- with an unlimited amount of storage.

Tech journalists were divided on the likelihood that the new tablet would succeed. Some said it had too few features. Others said the price point was just right for many who couldn't afford the iPad. After all, HP's TouchPad showed a lower-cost device could sell many units very quickly, even with fewer apps available.

When the last gadget on our list made its debut, many people thought it would be something quite different. But they bought it anyway.