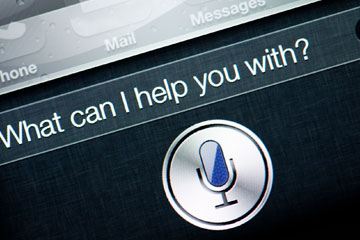 Our expectations were set up decades ago by the likes of HAL in 2001: A Space Odyssey and the computer of the U.S.S. Enterprise on "Star Trek." We've all been waiting for our computers to start talking and responding to us like real people. Real people with massive IQs and tremendous amounts of knowledge at their virtual fingertips, that is.

Even Apple had early visions of this voice-assisted future. In the late 1980s, Apple came up with a concept called Knowledge Navigator. The company produced a series of videos that showed people interacting with this fictitious system via a touch screen tablet and natural conversation. Its avatar looked and sounded perfectly human, and it could conduct a flawless conversation with you to help you plan your schedule, communicate with friends and colleagues, and access all sorts of networked information. They haven't quite reached the level of interaction and sophistication displayed in those videos, but with the release of the touchscreen iPhone and iPad, and now Siri, today's Apple has taken the first big step toward this futuristic vision.

Siri is a voice-activated assistant that mimics human intelligence and natural conversation. She interprets your voice instructions, and, when possible, carries them out. Siri can open apps, give you movie times and sports scores, make dinner reservations, call or send messages to people in your contact list and perform a host of other useful tasks. She doesn't just take your commands and silently perform them. She tells you what she's doing and prompts you with questions so that you have a chance to make choices and correct her if she misinterprets you. Siri is a far cry from the voice-recognition systems of yesteryear.