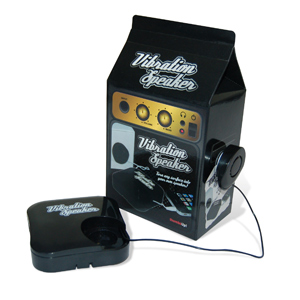 The Vibration Speaker from Thumbs Up transmits vibrations to surfaces -- such as the packaging for the speaker itself -- to create sound.
Courtesy Thumbs Up Ltd.

Few developments in musical history stand apart from all others: The first musical instrument, the development of recording technology and the day Bob Dylan switched to electric guitars are among them. Perhaps the most important change in the last few decades is the shift to mobile devices as music delivery systems.

Smartphones, MP3 players, tablets and other gadgets make music more accessible. But this shift to mobile music brings along a challenge. Listening to a device using headphones can be great. But most mobile devices don't have internal speakers strong enough to provide a really satisfying experience if you want to share music with other people.

One solution to the problem is to use portable speakers. But many portable speakers lack oomph. The sound might be tinny or thin. You may only be able to coax a relatively low volume from them. Another approach is to use vibration speakers, sometimes called vibration transducers.

These gadgets turn surfaces into speakers. Mount one on a window or set it on a table and suddenly you get a rich, full sound. The effect can be astonishing, particularly since these speakers can be relatively small. So how can such a tiny device create full sounds?

To really understand how a vibration speaker works, we first need to take a closer look at the world of sound and how we perceive it.

The Nature of Sound

At its most basic level, sound is movement. The sounds we hear every day are a result of molecules in the air banging into each other -- they react to the impulse that creates the sound in the first place. The molecules in a gas move around in random ways. That speed of that movement depends somewhat on the temperature of the gas. Cooler gases have less molecular movement, which makes collisions within that gas happen more slowly than they would if the molecules were zipping around quickly.

At 0 degrees Celsius (32 degrees Fahrenheit), sound will travel through air at 331 meters per second. That's approximately 740 miles per hour. But sound travels at 1,450 meters per second through liquid mercury. Solid glass transmits sound at 5,640 meters per second. Generally speaking, the more tightly molecules are packed within a medium, the faster it tends to transmit sound.

Sound radiates outward from its source. Imagine a still pond. Now go ahead and throw a big rock right in the middle. You'll see waves ripple outward from the point of impact. That's similar to how sound travels -- it moves out in waves in all directions. The further from the sound's source you are, the quieter it will be as the waves lose energy and spread out.

Sound waves vary in frequency and intensity. Higher-frequency sounds have a higher pitch. The volume of a sound depends upon how much it changes air pressure levels -- bigger changes mean louder sounds.

So how is it that we hear these molecular movements? We have our eardrums to thank for that. The eardrum is a thin piece of skin inside your ear. When colliding molecules hit your eardrum, it vibrates. Tiny bones connect to the eardrum and transmit these vibrations move along to the cochlea, a structure in your inner ear that contains fluid. The vibrations exert pressure on the fluid within the cochlea and the organ of Corti, another structure within your inner ear, translates these changes in pressure into electrical impulses that travel along the auditory nerve to your brain. Your brain then interprets these signals as sound.

Why can't sound can't travel through space? It's because molecules are spread so far apart from one another that they cannot interact. Without the molecular collisions there's no sound. If you want some peace and quiet, space might fill the void, metaphorically speaking.

The permanent magnet pushes and pulls on the voice coil depending on the direction of current. The voice coil makes a movable plate vibrate, transmitting energy to a surface.

The voice coil is a movable piece within the speaker. It's also an electromagnet. Passing current through the coil creates a magnetic field. Reversing the current switches the polarity of that magnetic field. At the base of the speaker is a permanent magnet. When the polarity of the magnetic field of the coil matches that of the permanent magnet, the two like fields repel one another and the coil moves outward, pushing the diaphragm. When the magnetic forces are opposite one another, they attract each other. This pulls the coil inward, pulling on the diaphragm.

Alternating the electricity flowing through the coil will cause the coil to move up and down quickly. This makes the diaphragm move, which in turn causes the air pressure to change. The movements of the molecules in the air provide the sound we hear. An amplifier provides the changes in electricity to make the diaphragm move in such a way that it reproduces the right sounds.

A vibration speaker is similar, except that there's no diaphragm. Instead, the voice coil attaches to a movable plate. Setting a vibration speaker down on a solid surface positions the plate so that it will vibrate against that surface. As current alternates in the coil, it moves up and down, pushing against the movable plate. The plate pushes against the surface, transferring the energy to the surface and turning it into a speaker. Because vibration speakers convert electrical energy into mechanical energy, they are also known as transducers. A transducer is a device that can convert one form of energy into another.

The solid surface will vibrate with the speaker, displacing air molecules around it. Just as with any other sound, your ear detects the movements of the colliding air molecules. Some materials reverberate better than others -- not all solids are created equal. In general, glass and wood tend to work best with vibration speakers. You can even mount vibration speakers on the inside of a wall, leaving the speakers invisible to those in the room. Because the speakers transfer vibrations to the surfaces you mount them on, the wall itself will send out sound.

Manufacturers have found clever ways to incorporate vibration speakers into various products. One company creates vibration speakers that you can mount on a ski helmet, letting you listen to music as you hit the slopes. Others design speakers that you can mount on the underside of desks or tables, giving you a full surface to work with without the clutter of visible speakers. And then there are bone-conduction speakers, which transfer vibrations directly to your skull so that you both hear and feel the music at the same time!

The first time I saw a vibration speaker was in a hotel room in Las Vegas during a CES visit. The company showcasing the product demonstrated their speakers by holding them against objects like cereal boxes, windows and even a business card. I was impressed with the sound they could get out of seemingly random objects. Since then, the market has blossomed for vibration speakers and you can find models from several different companies, ranging from desktop speakers to in-wall installations.

Are nanomaterials dangerous?
How does faxing over e-mail work?
How Global Cell Phones Work