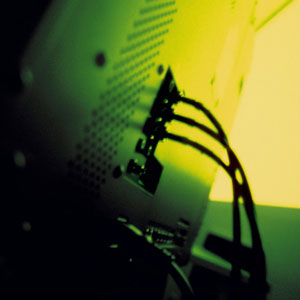 Sure, salespeople will encourage you to buy the expensive cables. But do premium audio cables really make that much of a difference in sound quality?
Photolibrary/Getty Images

Back in the day -- like, the mid-1970s -- audio cables were known by the humbler name of "speaker wires," and nobody got too excited about them. A stereo store salesman might throw in a bale of the old twisted copper, plastic-encased stuff for free as a gesture of appreciation -- after he'd convinced you to blow your savings on a set of towering quadraphonic speakers. Being able to blast the latest Foghat or Aerosmith record at paint-peeling volume was what everyone cared about. Speaker wire, in contrast, was just boring.

But that was then. Today, go to a big box store or peruse a home electronics Web site and you'll be informed that all that high-end digital audio equipment you're contemplating will sound like junk if you don't hook up the speakers with premium audio cable. Typically, cables labeled "premium" cost $20 to $35, but if you're an ostentatious audiophile for whom cables are the new bling, you can easily shell out as much for a set as rapper Gucci Mane spends on gold-and-diamond-encrusted necklaces. OK, OK, that's an exaggeration, but not by much. A company called Pear Audio markets ANJOU cables, which "offer the highest quality speaker to amplifier connection possible," for $7,250 for a pair of 12-foot-long connections [source: Pear Audio].

While some stereo aficionados insist that high-end audio cables ensure optimum sound quality from your speakers, other gadget-heads sneer at them as the biggest hype since Vanilla Ice. Do they really add as much to your music as they do to your credit card balance?

Basically, when your stereo or home theater system plays music, it reads the digital data off a CD, for example, and then translates it into an electrical signal, which it then sends out to your speakers. The speakers contain cones that vibrate according to fluctuations in the signal and reproduce the sound of that screechy guitar solo by Jack White or Adele's melodious voice. That's where audio cables come in -- they provide the connection and the route by which the signal is transmitted.

At the core, an audio cable is a bunch of braided strands of metal -- usually copper -- that's capable of conducting an electrical signal. The cable is coated with an outer jacket of plastic insulation and -- in the case of state-of-the-art cables -- additional layers of shielding, which is designed to keep the electricity in and prevent radio waves or other electromagnetic sources from interfering with the signal. With old-school speaker wire, a stereo owner had to use a knife or another tool to pare away some of the insulation and bare the end of the braided wire, so that it could be plugged into a spring clamp on the back of the speakers. Today's audio cables, though, often have a pin or plug connector on the back, which makes for less of a mess [sources: Procosound.com, Schaub].

In a perfect world, a cable would transmit that current perfectly, but in reality the metal in speaker wires generally creates a certain amount of resistance, which means that not all the electricity gets through. Consequently, the sound that comes out of your speakers isn't as true to the recording as it could be. The longer the wire has to stretch, the more resistance you get. One way to cope with this problem is to use a thicker gauge of wire, which increases the wire's ability to transmit electrical current. You can tell a wire's thickness by looking at its American Wire Gauge (AWG) number, which is the inverse of its thickness -- the lower the number, the thicker the wire is. For distances of less than 80 feet (24.4 meters), you usually can get by with a 16-gauge wire [source: Home Depot].

Do premium cables make a difference? 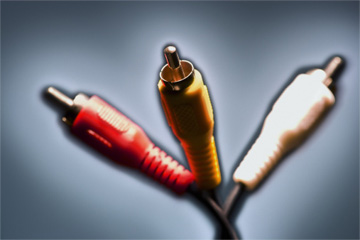 Can a cable improve the sound coming from your speakers?
Photodisc/Thinkstock

According to audio cable manufacturers and some audio equipment critics, if you don't pick your cables with the utmost care and spend the right amount, you're cheating your ears cruelly. On the other hand, there are plenty of audiophiles and skeptics who insist that's a bunch of bunkola, and that there isn't really that much of a difference between low-end and high-end cables, except for the price tag. James Randi, the magician-turned-skeptic debunker, offered $1 million to anyone who could prove that Pear Audio's ANJOU cables sounded better than a cheaper brand [source: Randi]. One snarky Internet audio reviewer even claimed that he can get the same sound quality as premium cable from straightened coat hangers [source: Becker].

On the side of premium cable purists, Gizmodo writer Wilson Rothman says there's a body of research indicating that premium cables may indeed maintain the strength and quality of an audio signal better than cheaper cables. The insides of premium cables, he notes, tend to be made of exceptionally pure copper or silver, and sometimes even exotic materials such as palladium, which are more conductive than the stuff inside their cheaper cousins. They also sometimes have added design features, such as built-in electronic filters, which weed out low-frequency interference that shouldn't be in the music [source: Rothman].

The big question, though, is whether or not you actually can hear what shows up in those impressive specs. According to CNet audio expert Steve Guttenberg, the truth is somewhere in the middle. If you're a hardcore audiophile with top-of-the-line speakers, you probably will notice a cleaner, more accurate sound when you use premium audio cable. But for people with less refined ears, the choice of cable may not make that much of a difference to justify the expense. "It's like asking if you need to drop $50 or $100 to buy a good bottle of wine," he writes. "No, unless you're a wine connoisseur; most folks are perfectly happy with a nice $10 variety" [source: Guttenberg].

How to Find the Right Cables for Your Listening Needs

While you don't have to spend thousands of dollars to get the absolute state of the art, using good quality audio cables may make a difference in how your stereo equipment sounds. The problem is, while you can go to a store and listen to different sets of speakers and compare how they sound to you, the salesman probably would object if you asked to hear the same set of speakers with different brands of audio cable. That means that you have to rely on specs. On the plus side, these simple guidelines should enable you to find cables within your budget that will help you to rock out.

But don't sweat it. As Audioholics critic Gene DellaSala notes, a standard OFMC cable with an AWG of 10 to 12 is fine for most living rooms, unless you're wiring the Bat Cave or the Palace of Versailles [source: DellaSala]. If you do need to stretch cables over long distances, you need specialized cable. Similarly, if you get fancy and run your audio cables behind walls or under the floor, you need to select cables that are designed for that sort of use. Check the label for an Underwriters Laboratories certification of CL2 or CL3 [source: Home Depot].

I went to college in the mid-1970s, when stereo mania was in full flower and having a monster sound system in your dorm or frat-house room was the height of perceived coolness. Guys I knew literally would work the entire summer at some grueling job, such as waiting tables or selling vacuum sweepers door-to-door, just to be able to afford a 100-watt Pioneer receiver, a Technics turntable and a set of man-sized Genesis III speakers. The funny thing was that some of them weren't really that much into the music itself. The extreme was a classmate of mine, who had an eardrum-bursting sound system crammed into a room the size of a large closet. Oddly, judging from the sounds I heard coming out of his room, he apparently only owned three records -- Steely Dan's "Aja," the eponymous Pablo Cruise album, and the soundtrack from "Star Wars." He played those three discs over and over again, at top volume, with the bass cranked to the max. For those of us within earshot, it approximated the sound barrage that U.S. forces used years later to convince Panamanian dictator Manuel Noriega to surrender.