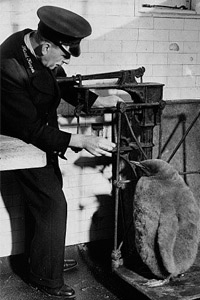 Scales have weighed everything from peanuts to penguins for centuries. This 13-week-old penguin hopped on the scale at the London Zoo circa 1952.
© Hulton-Deutsch Collection/CORBIS

There's something so commonplace about a weighing device that it's easy to forget its deeper significance. As the slightly skewed spring scale hanging around the produce aisle reminds us, the scale has long served humans as the chief arbiter of commerce, the sine qua non of shipping and the utility player of the pharmaceutical bench. From the smallest, most fine-tuned laboratory balance to the 10-by-120-foot (3-by-37-meter) pit-and-girder monsters that weigh train cars and tractor-trailers, scales make modern life possible.

Scales -- or, more specifically, balances -- weighed heavily on the minds of ancient builders, inventors and economic advisers. Small balance weights dating back to the early fourth millennium B.C. provide some of the first hints of mankind's evolving grasp of numbers. The most basic surviving balance scale in Egypt predates the dynastic period, placing its construction at earlier than 3000 B.C. Like us, the ancient Egyptians applied scales both in trade and in assaying ores and alloys [sources: Encyclopaedia Britannica; Petruso].

Balances, which weigh an object by matching it against one or more reference weights, have a delicate touch and are still used in laboratories. Scales use somewhat different physical principles and mechanical components to measure weight and other forces (weight is simply the force on an object due to gravity). Spring scales, for example, measure weight using Hooke's law, which relates force (weight) to the stretching or compression of a spring made from a given material.

Not all scales use springs, but all measure weight using mechanical components. So, mechanical and digital scales differ only in how they display weight -- mechanically or electronically. In the latter case, the scale employs an analog-to-digital converter that translates the continuous readout data from the scale into discrete digital information, much in the way that a CD or MP3 encoding scheme digitizes the waveforms of music.

Generally speaking, digital scales require less expertise to use than those with mechanical readouts, and are capable of higher precision and faster processing. Still, the capabilities of specific devices may vary, particularly when the weights are measured in tons [sources: Camarda; Cox; Crowley].

"It depends," says Derrick Mashaney, director of product development at Fairbanks Scales Inc., which specializes in large industrial scales. "Several master scales are mechanical. They're tweaked to be so extremely accurate that there is nothing out there that compares to them."

Just as a roadside carjack might lift a car via mechanical advantage -- the leverage of a handle or the inclined plane of a screw -- while a mechanic's hoist might use hydraulic pressure, different scales weigh objects using a variety of operational principles, like hydraulics, pneumatics or bending beams.

Whatever makes them stretch, compress or sway, however, most modern scales share one component in common: a load cell. 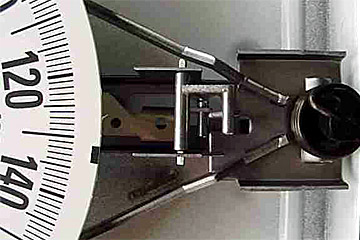 You're Gonna Carry That Weight

Research, industry and commerce require the capacity to measure weights under a seemingly limitless variety of environmental conditions and space constraints, while also controlling for possible errors. So, although strain gauges are the most widely used type of load cell, they're far from the only design in use today [sources: Eilersen; Omega].

Industries that require greater safety and sterility often turn to pneumatic load cells, which derive the weight of an object by measuring the air pressure necessary to balance it. These blowhards work well in the food industry or within hazardous sites because they don't contain fluids that might seep, drip or spurt into the environment. Pneumatic cells can heft a wide range of weights with high accuracy, but they require a clean, dry atmosphere and tend to take their sweet time responding [source: Omega].

Hydraulic load cells, which measure load as a change in fluid pressure, are commonly found weighing tanks, bins and hoppers. Because they function sans electricity, hydraulic cells work well in out-of-the-way locales where power is an iffy prospect. Pricey and complicated but rugged, these fluid-filled gadgets don't flag or fail, even under million-pound loads [sources: Eilersen; Omega; Takhirov et al.].

The terms "strain gauge," "pneumatic" and "hydraulic" describe operating principles -- essentially, the physical laws governing each weighing technique. But a buyer looking for a scale might also consider a cell's size, shape, configuration, materials and other physical aspects based on the job requirements involved. For example, a customer who needs to take measurements in a wet environment might choose a hermetically sealed canister cell, whereas a facility concerned with clearance issues might opt for a thinner bending beam cell [sources: Mashaney; Omega].

Form factors are also chosen for their ability to minimize the effects of extraneous forces. Scales typically measure force along a single direction called the principal axis -- which, in the case of weight, means downward (in the direction of gravitational pull). Weighing errors arise mainly from off-axis forces, which act parallel to the load, and from sideloads, which act perpendicular to it [source: Novatech]. Thanks to their zigzag design, s-beam load cells excel at eliminating sideload [source: Omega].

Within each of these categories and subcategories, there are sizes, shapes and price ranges to fit just about every need imaginable. But there's more to scales than just weighing your options. Measuring force is as fraught with technical troubles as any precision measurement -- no minor matter, when one considers that human lives -- and piles of money -- can rest on the difference of a few grams.

All Scales Great and Small

Hooke's law isn't just for weighing produce; it also underlies the operation of one of the smallest force-measuring devices in the world: the atomic force microscope used in biochemistry, biology and materials engineering. Such microscopes use a micron-scale silicon or silicon nitride cantilever (a spring-like beam, supported on only one side) to detect nanonewton and piconewton tugs -- forces on the scale of intermolecular attractions [sources: Cumpson et al.; Cappella and Dietler]. 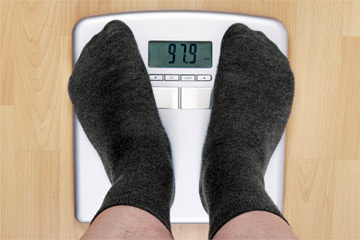 Nowhere is this truer than in scales. In this article alone, I encountered Hooke's law for springs; Pascal's law for fluid pressure; Boyle's Law, Charles' law and Gay-Lussac's law describing the behavior of gases; and Ohm's law for electrical resistance -- and that's to say nothing of the various unnamed laws governing stress and strain.