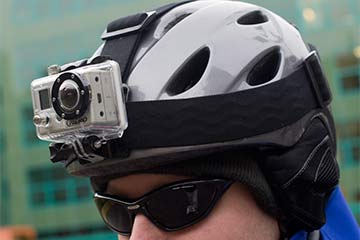 A man wears a ski helmet with the GoPro camera attached to it.
© Julian Stratenschulte/dpa/Corbis

Mountain biking, skydiving and police chases are all pretty cool things to witness firsthand, but my scaredy-cat self isn't likely to partake anytime soon. Helmet cameras are the perfect go-between for people like me, who enjoy watching other people's high-thrills footage without the risk, as well as for daredevils who want to re-live their outdoorsy experiences via high-definition images and video.

Today's helmet cams are compact, sleek, lightweight and usually waterproof, but like all great modern technology they started out much differently. In fact, helmet cam pioneer, mountain biker and video enthusiast Mark Schulze kicked off the practice in 1987 by bolting an old-school VHS camera to his bike helmet. For those of you who weren't around in the '80s, such cameras were big, bulky and likely headache-inducing when carried about on one's head. Those extra pounds were just the beginning, though, since wireless technology wasn't exactly available back then, either. Schulze actually placed a VCR, connected by cables to the camera, in his backpack and schlepped that around as well. His vision was to create instructional mountain biking videos, but at some point other companies caught onto his idea and used their considerable resources to design and produce helmet cameras with less bulk and higher quality [source: Mooney]. Today, helmet cameras are widely produced by manufacturers such as GoPro, Sony and iON, among others, and are often referred to as "action cameras."

Since then, people have dozens of uses for the camera beyond extreme sports. Helmet cameras have been used by football teams and firefighters as learning tools, or by police officers as insurance that their procedures were done by the book. Surfers and skiers get to capture beautiful footage of waves and mountains that would be impossible otherwise.

On the flip side, some people insist that helmet cams violate privacy rights, particularly in emergency situations. A township in Pennsylvania banned firefighters from using them. "I don't want somebody coming in my house and filming ... my wife might be in her negligee," was the town commissioner's memorable quote [source: Fire Rescue1]. Employers also point out that such video can increase liability, as illustrated by images of the aftermath of an Asiana Airlines crash in San Francisco, which depicted a survivor accidentally being run over by a fire rig. She was killed instantly [source: ARFF].

Despite the hesitations of some, many people are outfitting their helmets with these cool, lightweight video-making tools. Keep reading to find out who uses them, why and how you can too.

The first time I saw a helmet camera in action was at my son's T-ball game, atop the enormous batting helmet of a 4-year-old as he rounded the bases for the first time ever. Although I'm sure his parents had a regular camera rolling in tandem, the helmet version forever captured his teeny-tiny perspective on that most important of days.

Back in 1991, World League of American Football quarterback Kerwin Bell was the first pro player to don a helmet camera during a game, effectively letting the audience in on the action as he called plays, scored touchdowns and evaded sacks [source: Schmitz]. Critics and players ended up rejecting the use of the technology for years, citing the potential for cheating (knowing the other team's plays) and bulk of the device itself. In 2015, it appears that the tide is turning on this school of thought, though, with arena football leagues employing live-action helmet cameras to thrill audiences [source: Ecker]. College football officials also plan to implement the technology, although more in an effort to improve coaching, since it will allow staff to see exactly what players do, making play calls easier [source: Associated Press].

Most sports enthusiasts who use helmet cams are of the adrenaline rush variety. They careen down mountains on skis or bikes, through the clouds with their parachutes and across highways on their hogs, capturing every daredevil second along the way. Taking such footage is a way to re-live the thrills and scenery, share them with friends and family, and also an ideal method for capturing unique images of wildlife and other cool sights without having to actually stop and whip out an actual camera.

Of course, some people enjoy tempting fate, as in the case of this cyclist who leaned in and let a rattlesnake attack his helmet cam. For the record, we advise against that (All together now: Shudder). Helmet cams also allow people to capture behavior that would be otherwise difficult to fully describe, as with the case of a scuba diver who recorded his entire interaction with a curious, 12-foot (4-meter) great white shark, which he had to poke with his spear several times before he went along his merry sharky way [source: Algar].

Some extreme athletes take helmet cams to the next level, using them as fundraising tools. Jump4Heros raises funds for charities that provide support to armed forces. The team's skydivers upload breathtaking videos to show would-be donors the extraordinary lengths they go to in support of these causes [source: Coldwell].

Gone are the days when marine biologists had to blindly guess about shark behavior. Nowadays, cameras mounted to the world's most feared predator offer direct insight into their feeding habits, movements and general interactions [source: Landau]. 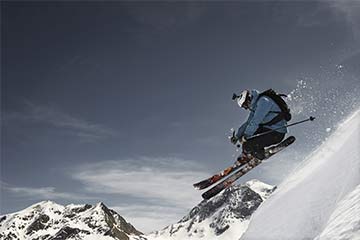 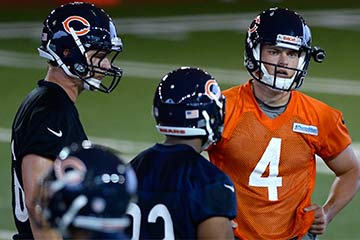