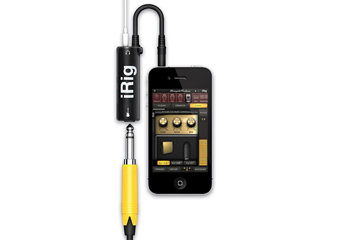 The iRig from IK Multimedia uses a cable and an app to turn your iPhone into a room's worth of musical gear.
Courtesy IK Multimedia

To be a guitar-wielding rock star, you need a lot of gear. Your axe will only get you so far. Without an amplifier, not many people are going to hear you shred through a wicked solo. Not all amps create the same sound -- you'll have to pick one that gives you the effect you want. And effects pedals open up your options even more. All that gear takes up space and can be a pain to carry around.

"But that's what roadies are for," I hear you say. I agree. But when rock stars are just starting out, roadies can be few and far between. The sad fact is you'll likely have to schlep your own gear from gig to gig. And it can be awfully hard to rock out when you're on the verge of developing a hernia.

But what if you could consolidate all that gear into a single mobile device? What if this device could simulate the effects of all those pedals and amplifiers? And what if you could switch out virtual gear on the fly, giving you nearly limitless options?

As it turns out, there are products on the market right now that will let you feed your guitar output through an iPhone and use it as an amplifier with all the bells, whistles and wah-wah pedals. How can that be possible?

Tune Up, Plug In, Rock Out

Gadgets like IK Multimedia's iRig, Peavey Electronics AmpKit LiNK and PocketLabWorks' iRiffPort let you connect your electric guitar to your iPhone or other iOS device. A special app on the device does the heavy lifting, synthesizing the various gear you select so that the sound output is close to a guitar hooked up to actual amplifiers and effects pedals.

While these devices strive to reproduce a similar outcome, they do it in different ways. Devices like the iRig and AmpKit LiNK have a 1/4-inch (6.4-millimeter) female input jack connector and a male headphone plug that you insert into your iPhone's headphone jack. They also have a female 1/8-inch (3.2-millimeter) female output jack for headphones.

Plugging these devices into the headphone jack of your iPhone creates the connection you need to turn the iPhone into a guitar amplifier and effects studio that fits in your hand. The iPhone's headphone jack is also a microphone port -- this is what lets you plug a headphone set with mic into the iPhone and use it when you're on a call. As you play your guitar, the electric signals the guitar generates travel through the output cable to the device, which acts as an adapter and sends the signal along the headphone cable to the iPhone. The iPhone processes the signal and converts it from analog to digital.

The iRiffPort uses a different connection method. Instead of plugging into the headphone jack of your iPhone, you plug it into the 30-pin connector on the base of the phone. The signals pass from your guitar through the iRiffPort and convert from analog to digital signals. This signal then passes into the iPhone through the Apple dock.

Once in your phone, it's time for the software to take over.

While the iRig and the AmpKit LiNK both plug into the iPhone's headphone port, they aren't identical. The iRig doesn't require a power source while the LiNK uses batteries. The powered LiNK can perform some signal processing before the signal passes on to your iPhone.

This iPhone Goes to 11 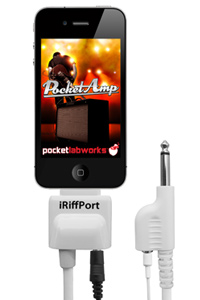 The iRiffPort plugs into the iPhone's 30-pin dock, not the headphone jack.
Courtesy PocketLabWorks

Traditional guitar gear is analog, which means its signals are continuous. If you were to look at a graph of an analog signal, it would look like an unbroken, curving line. Analog gear preserves this signal. An analog amplifier is hardwired to take a signal, boost it and process it. But analog gear is limited to what the physical connections can do. One type of amplifier is always going to sound different from another. The components and methods used by manufacturers vary, sometimes model by model.

By converting the analog signal to digital and playing with that signal in a virtual amplifier, you open up many more options. There are many sound processing apps for the iPhone that let you mimic the sound you'd get from various real-world analog equipment. Sometimes it's almost indistinguishable from a physical setup.

With the right software, you can take a digital signal and make it sound like practically anything. You're not even limited to the standard effects you'd get with analog gear. But there are downsides too.

Digital amplifiers may not reproduce all sounds faithfully. You may feel as if some effects or tones are missing something or aren't quite right. There's also a psychological element at play -- sometimes a physical amplifier may feel like a better choice simply because you're familiar with it.

Another potential problem with iPhone amp kits is that some can introduce noise to your signal. You may get a hissing noise on top of your high ends. Or you may notice that some signals don't seem to come through cleanly. Most of the amplifier kits for iPhones have features to reduce noise either by introducing an option in the software side or -- as is the case with the AmpKit LiNK -- providing a powered peripheral that can pre-process a signal before it goes to your phone.

With the output jacks on these kits, you can send a processed signal out to another device like headphones or even a sound system or mixer board. That means you could potentially leave behind all those bulky gear boxes and just bring your iPhone with you to your next gig – assuming they'll have the amplification you need. As the technology improves, we may see a transition away from traditional analog gear. Some artists will probably hold on to their analog gear as long as they can and protest the transition. But then, electric guitars once faced derision and skepticism too, and look where they are today!

I first saw an iRig at a CES event a few years ago and I was impressed by the potential for the hardware. The software is really where it's at -- developers have worked hard to create apps that replicate the sounds generated by mountains of physical equipment. Watching a guitarist go from playing a Brian May solo with that distinctive Queen sound to a crunchy grunge riff with just a couple of swipes on a touch screen was a remarkable experience.