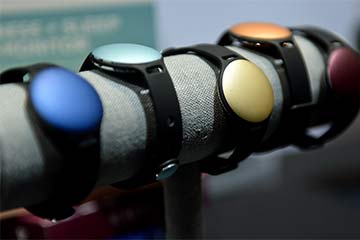 The many colors of the Misfit tracker are on display at the 2015 Consumer Electronics Show in Las Vegas.
© Britta Pedersen/dpa/Corbis

Marty McFly and the rest of the "Back to the Future: Part II" gang had it all wrong. Flying cars and hoverboards are still a long way off, but wearable fitness trackers that can deliver a dizzying array of personal health-related data are here, and they intend to stick around. It used to be that our wrists were home solely to watches, charm bracelets and other sparkly baubles, but wearable tech has introduced numerous designed to arm us with information ranging from sleep habits to heart rate and number of steps per day. Among the marketplace leaders are Fitbit, Garmin, Nike, Jawbone and Moov, among many others [source: Palladino and Prospero]. The Misfit brand launched in 2011, and is largely known for providing more affordable fitness tracker options than many pricier counterparts. In fact, Misfit claims it created the first fully featured activity and sleep tracker under $50. In an industry that includes many models over $100, that's a pretty big dip in cost.

The company was established by several big names in the tech industry, including Sonny Vu, co-founder of AgaMatrix, Sridhar Iyengar, co-founder of AgaMatrix, and John Sculley, former CEO of Apple and Pepsi. They haven't always taken a conventional approach to product development, turning to a successful Indiegogo campaign to raise $800,000 in crowd funds to garner support for the Misfit Shine. The crusade was effective not only from a monetary perspective, but also because it increased awareness about the brand in a tech industry often dominated by the usual suspects, like Microsoft, Apple and Fitbit. And, though the company spent $20,000 on its pitch video, Vu thought the money was well-spent as its campaign was fully funded in a few hours [source: Luzar].

Fitness trackers like the ones Misfit manufactures have exploded in popularity thanks to our inherent love of numbers, data and constant self-scrutiny. Many people have goals (whether reasonable or lofty) for their personal health, and having information literally at our fingertips makes it easier to motivate or rationalize our habits. In fact, it's become such a phenomenon that industry experts are predicting the niche will grow from $1.92 billion per year value in 2014 to $2.8 billion in 2019 [source: Keller]. 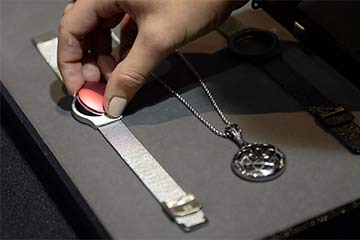 The Misfit tracker can be taken out of its band and placed on a pendant.
© Britta Pedersen/dpa/Corbis

Fashion, function and fee are the three hallmarks of Misfit trackers. The brand prides itself on offering options to suit any budget, as well as a visually pleasing product.

Misfit Shine: The original Misfit product, Shine features a standard black band, but offers faces (a circular disc where the "brain" of the device lives) in a number of colors, including gray, topaz, champagne and even Coca-Cola red. Wearers looking for a little more finesse can order accessories separately, including bands in different hues and even necklaces that the removable face snaps into. Shine can track steps, calories and distance associated with walking, running and other sports. It's even waterproof up to164 feet (50 meters) deep. The model also features a sleep tracking capability, collecting data on the user's total number of hours slept, then subdivided into the types of sleep (light and deep). At $100 a pop, it's comparable in price with other similarly functional brands [source: Misfit].

Swarovski Shine: A glammed-up version of the regular Shine, Swarovski Shine was created to meet the needs of fitness fashionistas. Rather than the standard round face, Swarovski Shine is fitted with an "activity tracking crystal," which comes with both a sport band and a fashion-forward bracelet, depending on the type of look you're sporting for the day. The crystal houses the standard activity tracker, which monitors all the same functions as Shine. Cost starts at $169 [source: Misfit].

Misfit Flash: At $49, Misfit Flash is half the price of Shine. In fact, it can do everything Shine can, but the band and tracker are made out of plastic, rather than aluminum, giving it a more economical look and feel [sources: Kwok, Stein].

All models are powered by a replaceable battery with an estimated four to six month life span, so users don't have to mess around with yet another charging cable. They also sync wirelessly with smartphones, and are compatible with a variety of cool apps, including the one Misfit offers. 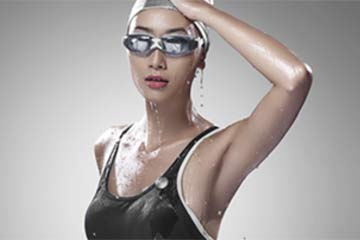 Pros and Cons of Misfit Trackers

There are many great features about Misfit trackers. First and foremost, they are fairly affordable. Misfit's devices are also very attractive pieces, as far as fitness trackers go. They look like a cool digital watch, and the color options are many and varied. They can also be worn in a variety of ways, so if you find wrist accessories to be annoying or uncomfortable, there are other options [source: Ghose].

Misfit trackers also don't require charging, and the replaceable battery lasts in the neighborhood of four to six months [sources: Kwok, Misfit]. As someone with roughly 27 charging cords lying around the house, I appreciate this feature. The wireless syncing capability is another major pro, and the graphs/charts that present the user's daily data are easy to read and understand. Plus, the app also uses a points system, so that you can compare yourself with other users on an apples-to-apples scale. Misfit's waterproof status also makes it invaluable to swimmers.

Even the best tech has its flaws, and Misfit devices are not without theirs. Although a user can check progress throughout the day by percentage, more detailed information is only available via the app, or a pretty confusing display feature, which involves lights flashing on the face. As a result, it's necessary to log in to the app to truly get a handle on calorie burn and overall progress. Critics of the app says that it's tricky to navigate, and doesn't offer any advice on what to do with the data that has been collected. There's also no nutrition entry capability, which is a pretty important part of overall health and fitness [sources: Ghose, Stables]. It should be noted that you can connect through to MyFitnessPal, so that helps fill that void [source: Palladino].

Flash, as the least expensive option on the market, has been noted as feeling and functioning cheaply. Test users claim that the wristband breaks/cracks and the face pops out with little effort, making it frustratingly easy to lose. Natasha Hill, of Kennesaw, Georgia, purchased Flash for each of her two sons. She reports that they have been through five wristbands in only a couple of months and had to scour their home to locate the tracker face when it fell out.

Despite legitimate complaints and concerns, the fitness tracking industry is still relatively young, giving the companies involved plenty of opportunity to enhance the features that users love, as well as work out the kinks.

Misfit is stepping out of the activity tracker realm into smart housewares with the launch of Misfit Bolt, an IOS-connected light bulb that can be controlled by Misfit Shine and Misfit's Beddit sleep tracker. In fact, the bulb can actually be used to mimic sunrise, waking sleepers at the perfect time for them, based on their nighty-night data [source: Marks]. On my wish list? Kindly design a smart stove and/or oven that can cook dinner safely and deliciously, 'mkay?

There's a dizzying array of fitness trackers on the market. Misfit's attractive, affordable options are good for people looking to ease their way into using such a device, so long as you remember that you get what you pay for.