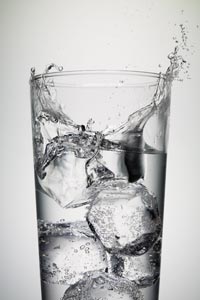 During the hot, hazy days of summer, one of the most refreshing ways to beat the heat is kicking back with a cold beverage. To some, the sound of ice cubes clinking against the glass or the sight of condensation forming on the outside of a soda can is the stuff summer memories are made of.

But there are times when you won't have a cold drink immediately on hand. Many people stock unopened six-packs in cupboards before using them, so when it's time to enjoy them they're at that unpleasant stage known as room temperature.

Understandably, some of us want a cold beverage sooner than later. But chilling a drink the traditional way -- in the refrigerator or freezer -- might take a little too long, only making those muggy summer hours feel even longer. The freezer obviously speeds things up the most, but it takes about an hour to get a can of soda to a low enough temperature. You also run the risk of freezing the liquid, ruining your drink and forcing you to start over, making the whole process of waiting -- something you tried to avoid in the first place -- take that much longer. Using a refrigerator isn't much better. In fact, it can take several hours to cool a drink.

The problem of beverage temperature includes not just beer and soda but most white wines, too, since many people usually enjoy it chilled a little below room temperature. If you've bought a bottle of wine for dinner and forget to put it in the fridge for a few hours before serving time, you either have to wait -- which most people can't afford to do once dinner has finished cooking -- or forget about it.

­When there's a problem like this, however, you can count on someone to think of a way to take care of it. Fortunately for those of us who cringe at the thought of a tepid can of soda or beer, rapid drink chillers can cool your beverages down in a matter of minutes. How do these machines help our drinks keep their cool?

There's no doubt the invention of the refrigerator has changed the way we store and preserve food and drinks, making it easier for us to keep things like milk, juice and fruits and vegetables for extended periods of time. But that's just what a refrigerator is for -- storing food and drinks. It's not a refrigerator's job to cool goods in a speedy fashion. Most cooling units are big and have a lot of storage space, which means fluids don't cool quickly. It's just like air conditioning a room: the larger the room, the longer it'll take to lower the temperature.

So the first goal of a rapid drink chiller is to significantly reduce the amount of space. That's why, conveniently, they're fairly compact -- about the size of a toaster oven. At the same time, of course, they also need to provide a useful cooling system. A rapid drink chiller, specifically the most popular and readily available Cooper Cooler One Minute Drink Chiller, invented by Greg Liobl, uses cool water jets, ice and rotating rollers to do this. So how does it all come together?

Rapid drink coolers pass cool water over your aluminum can or glass bottle as a roller spins the container. When cool water passes over the surface of the can or bottle, the water is colder than the surface it's touching. This allows heat energy from the warmer material -- the drink container you'd like to chill -- to transfer to the colder material: the cool water that passes over the container. The water that passes over the bottle or can is recycled into a compartment filled with ice (which keeps the water at cold temperatures), and the process repeats itself. The machine spins cans or bottles with an electric motor in order to cool the drink evenly.

A rapid drink cooler can be useful during any number of occasions, especially during hot summer months when people are outside and enjoying drinks at large gatherings. For instance, if you need to provide six people with six cold drinks sooner than later, instead of throwing a six-pack in the freezer or a cooler full of ice and waiting for the drinks to chill, a rapid drink chiller should be able to satisfy everyone in about six minutes. Depending on the size of the drink, you can normally chill a can of soda in one minute or a larger bottle in three to four minutes.

So far, we've only mentioned big, planned gatherings involving lots of people, but rapid drink chillers are also great for unexpected guests, and quick, improvised dinners. When someone pops over with a six-pack of beer or soda or a bottle of white wine, rather than wait around for drinks to chill, you can solve the problem in mere minutes. White wines, typically served chilled, can be ready almost immediately after you step in the house. And since making a big dinner can get complicated, with many steps along the way, chilling drinks quickly right before serving time makes the whole process easier.

To operate a rapid drink cooler like the Cooper Cooler One Minute Drink Chiller, you simply fill up a compartment with water and ice. After placing the can or bottle you'd like to chill into a small nook and closing the lid, you can adjust settings and temperatures. (Even though the One Minute Drink Chiller looks too small for a bottle of wine, there's a small hole on one end that lets the bottle's neck stick out from the machine.) Rapid drink chillers can chill cans of soda or beer down to 38 degrees Fahrenheit (3.3 degrees Celsius), and they can chill wine bottles, which shouldn't be quite as cold, down to temperatures around the low 50s (10-12 degrees Celsius). The compartment spins drinks to cool them evenly, and a no-spin option within the device can protect delicate wines from being shaken up too much.

For more information on food and drink gadgets, chill out with the links on the next page.