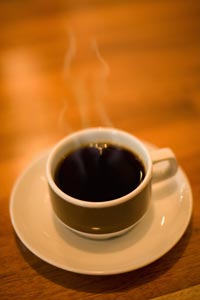 Want to keep your drinks warm down to the last drop? Mug warmers might hold the solution.
Nick Koudis/Getty Images

­When it's so easy to get distracted during a busy day, with work, chores and errands all jockeying for our attention, it's more than likely we sometimes upset some of the simpler pleasures in life.

For example, a mug of strong, freshly brewed coffee, or a cup of hot tea. Many like to start off their day (or even give a little extra kick to their afternoon) with these types of drinks, and most people drink them hot, or at least fairly warm.

But once you pour yourself a cup of tea or coffee and get ready to drink up the warmth to pleasantly heat your stomach, any number of things can happen to derail your attempts at comfort -- a phone call, a crying baby, a knock at the door. Within the shortest span of time, your attention is now redirected, and your mind starts to wander. Chances are you won't realize your unfortunate neglect until your eyes catch that still and tepid mug, now much less appealing than it was when it was nice and hot.

In most cases, people pour the substance down the drain and forget about making another cup. When the heat goes, so too can the taste. But what if this didn't have to happen in the first place? Fortunately for those of us who are either forgetful or like to stretch out our enjoyment of a hot drink, electric heat has made it possible to keep hot drinks hot, no matter how long you leave them unattended. You can buy a device called a mug warmer, which can keep your coffee, tea or any other kind of hot drink at a constant desired temperature with the help of a small electric heater.

So what's going on inside a mug warmer, and how does one transfer heat to your cup?

For more information on other food conveniences, warm up to the links on the next page.