How a Clothes Steamer Works

by Chris Opfer
NEXT PAGE 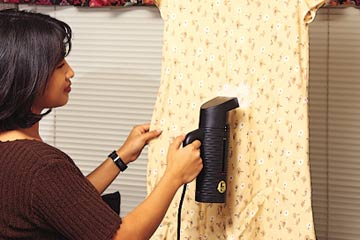 Garment steamers let you get the wrinkles out of your clothes while they're still on the hanger.
Jiffy Steamer Company

Most high school history teachers and "Jeopardy!" participants would probably cite the steam engine, which powers trains, boats and factories and sparked the Industrial Revolution, as the most important water-vapor-based innovation of all time. Fashion designers, stylists and anyone who has tried to pack formal wear in the overhead compartment of a cross-country flight might disagree and cite the clothes steamer instead. A popular alternative to the clothes steamers are found everywhere from hotel and fitting rooms to interior design shops and beauty salons.

The machines were developed in the early 1900s as a solution to a men's fashion emergency: the constant wrinkling of bowlers, fedoras and other felt hats in vogue at the time. A home remedy of using teakettle steam to straighten out disheveled headwear later became a commercial endeavor when businesses created more efficient versions by attaching a hose and brush head to a kettle-like device [sources: Best Steam Reviews]. Decades later, similar technology is being used not only on hats, but also on dresses, suits, drapes and even wigs.

Today, garment steamers have evolved into a variety of models, including hand-held portable versions and industrial, heavy-duty machines used by dry cleaning operations. Meanwhile, a middle-of-the road, medium-sized version is a popular choice for professionals and regular home users alike. In addition to working on materials that shouldn't be ironed, the less cumbersome travel editions are easier to lug around than a traditional iron and don't require a board or other flat surface to do their magic.