by Chris Pollette
Prev NEXT
6 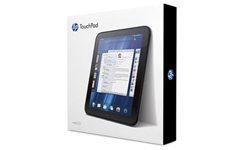 Hewlett-Packard discontinued the TouchPad less than two months after its 2011 debut.
Courtesy HP

In April 2010, Hewlett-Packard acquired Palm and its critically acclaimed webOS operating system. On July 1, 2011, HP released the TouchPad, a webOS-powered tablet computer. Priced to compete with Apple's iPad, the TouchPad featured a dual-core processor and a front-facing camera [source: Krakow]. The devices were received reasonably well by critics, though some complained of slow performance. But it didn't sell. Retailers soon found they had a surplus of TouchPads, and only weeks later rumors surfaced that Best Buy wanted to send thousands of TouchPads back to HP [source: Arya].

On August 18, HP announced that it would stop manufacturing and selling computers [source: Satariano]. The company also announced the end of the WebOS business, less than two months after the TouchPad was released [source: Associated Press].

To get rid of inventory, HP -- and many retailers -- decided to hold a sale. In many cases, the price of the tablet dropped significantly, to $99 for the 16GB version. TouchPads sold out in a hurry. In fact, HP took reservations for the tablets it had ordered but hadn't yet received. Those sold quickly, too. CEO Leo Apotheker's tenure ended shortly after the computer and webOS announcements were made, and former eBay head Meg Whitman took over. HP reversed its decision on making PCs, and in December decided to make webOS open source [source: Ziegler]. Could the sudden popularity of the tablet spur a renewed interest in the OS?

HP wasn't the only company to release a much-hyped product to slow initial sales, as you'll see on the next page.