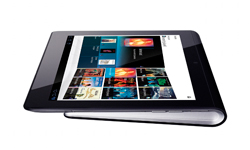 Many tablets have tried to challenge Apple for the title of Tablet King of the Universe, but for now, the iPad still retains its spot at the top. One of the most impressive competitors is Sony's Tablet S, which relies on Google Android's Honeycomb operating system.

The Tablet S boasts some pretty impressive features. For one, Sony has designed the tablet so that it can play certain PlayStation One and PSP titles. This makes the Tablet S one of the more compelling tablets as far as mobile gaming is concerned.

The Tablet S also has Digital Living Network Alliance (DLNA) compatibility technology. Devices that are DLNA certified can interact with one another over a local wireless network. Pair a Tablet S with DLNA speakers, and you've got a sound system that can pull content from the Internet. You could also push video from the Tablet S to a DLNA-capable television.

There are some drawbacks with the Tablet S. For one thing, the tablet requires a proprietary charging cable. If you need to replace the cable, it might be a bit harder to track down than a typical USB cord. The Tablet S is also much thicker than the svelte iPad, which might be a strike against it in the eyes of some people.