by Chris Pollette
Prev NEXT
9 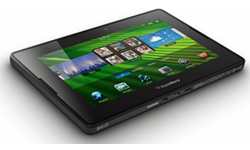 BlackBerry's PlayBook tablet, expected to be a contender for the growing enterprise tablet market, simply didn't sell as expected.
Courtesy Research in Motion

Research in Motion, also known as RIM, is a communications industry darling. Though you may not know the name of the company, you probably know the name of its most famous product, the BlackBerry line of smartphones. Ever since Apple released its iPad tablet, tech wonks began speculating on when competitors such as Google and BlackBerry would release devices to compete.

RIM unveiled its PlayBook tablet in late 2010, but the device didn't hit store shelves until July 2011. Running a custom operating system based on the QNX kernel, the tablet received mixed reviews from the tech press. And unfortunately for Research in Motion, the PlayBook didn't sell as well as the company had hoped -- at least, not initially. In December 2011, RIM still had a lot of inventory and was relying on new marketing efforts and lower prices to push the tablets to more customers [source: Whitney]. The discounts did improve sales somewhat, and as of the end of 2011, RIM hasn't thrown in the towel on the tablet market.

Mobile gaming is a market that's becoming hotter every year. The gadget on the next page is proof of that.