by Chris Pollette
Prev NEXT
10 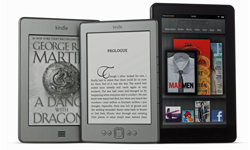 Amazon refreshed its line of Kindle readers and managed to capture headlines and sales once again in 2011.
Courtesy Amazon

Amazon's e-book reader wasn't the first on the market. But after its release in 2007, the Kindle helped capture the public's attention and encourage people to try reading electronic books. The device has gone through some changes as the years have gone by, including expansions in the lineup to include a larger reader and an advertising-supported version to bring the entry price point down. All of them were dedicated e-book readers with black-and-white electronic ink screens. In 2011, Amazon decided to make some changes to the line yet again.

The new base model, simply called the Kindle, brought the price of the device down to $79 when it was released (the original Kindle cost $399 at launch). A pair of new touch-screen readers, the Kindle Touch and Kindle Touch 3G, offered new functionality. The Kindle Keyboard and its 3G twin closely resemble the previous-generation Kindle, but offer physical keyboards for users who prefer them. The new models helped Amazon stay in the race with its competitors -- especially Barnes and Noble, which debuted a new version of its Nook black-and-white reader in 2011. The devices also kept people talking about Kindles in the age of tablets -- but Amazon had an answer for that in 2011, too, as we'll see later.

Speaking of tablets, on the next page, we'll look at one of the most hotly anticipated gadgets of 2011.