How accurate are fitness trackers? 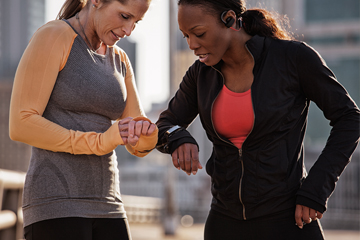 Unfortunately, your tracker may be underreporting or overinflating your results.
Marilyn Nieves/Getty Images

It isn't a scarf, a particular necklace or even her favorite shoes. When Bridget leaves the house, the one accessory she's always sporting is a bracelet. And, like most of her preferences, this piece of jewelry makes a statement. But it's probably not the statement you're thinking.

Bridget's bracelet is actually a fitness tracker affixed to a band of rubber, and she never leaves home without it. In fact, she sleeps with it on and wears it around the house, while she walks her dog and when she works out at the gym. It tracks her activity levels, including the number of steps she takes, the amount of sleep she gets and the quantity of calories she consumes. Then it syncs the data with an app on her smartphone, letting Bridget know whether she's reached her goals. And most of the time, she does.

But does she really? What if all those meticulously recorded steps and snacks are actually wrong?

An experiment conducted by a researcher at the University of Arizona found several fitness trackers were unreliable when it came to measuring energy expenditure. The study's participants engaged in a variety of activities while wearing fitness trackers, including cleaning a kitchen, walking on a treadmill, standing, playing a board game and typing. While the devices they wore measured activity levels when participants walked briskly, these same devices were surprisingly bad at calculating the energy costs of cleaning, standing and other light activities. Overall, the devices vastly underestimated the energy expressed and calories burned [source: Reynolds].

Likewise, a study by Iowa State University researchers found fitness trackers were often inaccurate. After 30 men and 30 women wore eight different fitness trackers for an hour-plus workout, including 13 different activities ranging from Wii tennis to running, researchers discovered several inaccuracies among the models that led, in some cases, to a more than 23 percent rate of error. Across the board, the fitness trackers performed best when capturing brisk aerobic activity, such as walking or jogging, as opposed to light activity or resistance exercises. And the more accurately the devices recognized activity, the more accurately they measured calories.

These inaccuracies matter for people relying on fitness trackers to increase their levels of physical activity. The worry is that some people may, for example, become discouraged after failing to meet a tracker's built-in goals when their activity levels might've been on par all along. Conversely, people who are overweight are prone to overestimating the amount of energy they expend. Then add a fitness tracker that is either under- or overestimating the activity they are actually doing, and there is plenty of room for poor results [source: Iowa State University].