Browse the article Pro Tips on Posing for Perfect Pics 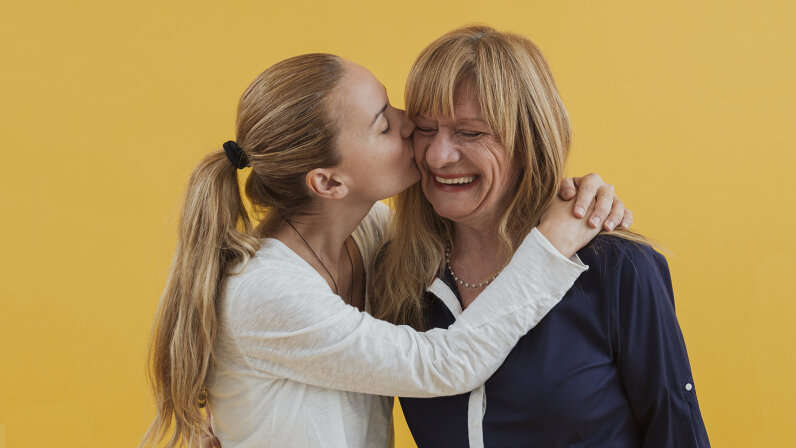 This mother and daughter are relaxed and having fun; it comes through in this beautiful portrait. Thanasis Zovoilis/Getty Images

The holidays have come and gone and all you have to show for the festive season is a phone full of photos you'd rather not post on social media. Sound familiar? While a flawless, FaceTuned selfie isn't necessarily the goal (unless you're into that sort of thing), most of us could benefit from a few foolproof tips for highlighting our best assets. We asked a couple of photography pros to reveal the secrets to showcasing a Tyra-worthy smize and feeling super confident in front of the lens.

The first things so many of us do when we're caught staring down the barrel of a camera or phone is to either freeze up or spring into an animated re-creation of the Hadid sisters' greatest poses. According to experts, neither of those tactics bodes well for anyone who doesn't have a Victoria's Secret or Gucci contract to their name.

"People try too hard to make themselves look like some high-fashion model," says San Francisco Bay area-based photographer, Gabe Ruvinsky. "There's no need. Just be yourself and let the photographer shoot."

San Francisco photographer and designer Daniela Velasquez-Mora agrees. "In my opinion I think the biggest mistake is over-posing," she says. "Looking natural and relaxed is more flattering!"

So when you spot a camera coming for you, take a deep breath, remember to exhale, and trust that if you loosen up and resist the urge to emulate a fashion icon, you're probably much better off.

But don't be weird about it. Often one of the most jarring parts of assessing photos can be the realization that your posture sucks. While it's important to realize we all should have listened when our mothers scolded us for slumping over in teen angst, the best thing we can do for the sake of future photos is take proper measures to correct our curved spines and shrugged shoulders.

"Engage your abs, roll your shoulder down and do you!" Velasquez-Mora says. That means taking heed of tip one and shaking out any tension that creeped into your muscles the second the camera came out. "One of my favorites is adding movement!" Velasquez-Mora adds. "Walk, tuck your hair, adjust an accessory. Little gestures add a very dynamic feel and best of all come across as natural."

Another route to improving an imperfect stance is to put in some prep work ahead of time. "If you have really bad posture, stand in front of a mirror and practice," Ruvinsky says. "But if worst comes to worst, sitting down isn't a half-bad plan B." Just make sure to sit up straight, like mom told you.

Any loyal "Friends" fans will fondly remember Chandler Bing's distinct inability to smile on cue. Judging by the astounding amount of awkward family photos circulating the internet, Chandler isn't the only one who struggles to let his natural good humor shine through. So what's the key to not looking like a serial killer when the camera comes out?

"Laugh! Literally laugh!" Velasquez-Mora says. "Forget about the camera and people watch or find something humorous about the moment or location."

If the surrounding environment leaves something to be desired as far as inspiration goes, call upon your memory bank ... or go rogue and skip the smile entirely. "Think about an animal or something that instantly makes you laugh," Ruvinsky says. "If that doesn't work, mug it!"

4: Just Say No to Unflattering Angles

Everyone has that friend who fancies themselves a photo pro and believes springing into a crouched position and dictating directions will make for the best portraits. While that agility can make for some interesting action shots, it's also a surefire way to ensure double chins all around. Your right as the subject is to put the kibosh on that kind of nonsense. "Make sure your photographer doesn't shoot any low angles," Ruvinsky says. So speak up and get your camera person to come to eye level or above.

And if you want a little more insurance to protect against an unbecoming outcome, adding a subtle repositioning can work wonders. "A little bend at the waist toward the camera helps you keep your chin lifted."

Above all else, have fun! Or at least give it your best shot.

Now That's Interesting
If all else fails, grab some buddies. According to a study published in the journal Psychological Science, people appear more attractive in photos when they're presented as a group versus alone due to a phenomenon called the "cheerleader effect." Go team!