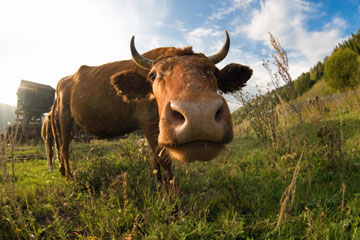 Fisheye lenses create an illusion of extreme depth — objects close to the center of the lens will appear huge while all other objects (in this case, the bull's body and the hilly landscape) appear to curve off into infinity.
Hemera/Thinkstock

One photographic technique can both captivate and disorient us. It can twist a baby into a wide-eyed, big-mouthed gargoyle, but can also render a panoramic night sky in striking detail. It's graced CD covers and countless advertisements, and is even being put to use to make our roads safer. The fisheye lens has a name you won't easily forget. And when this unique creative tool is used well, it can produce unforgettable images that bend our perception of reality.

Ask any professional photographer or amateur enthusiast and they'll tell you that there's an almost endless variety of lenses on the market. From ultra-long telephoto lenses that can capture wildlife from hundreds of yards away to wide-angle lenses designed to grab an entire landscape in one click of the shutter, a shooter with enough resources could have one lens for almost every situation she encounters.

Most of these lenses have a rectilinear design: Light entering the lens travels in a nearly straight path to the film or sensor (though all lenses are slightly curved). This renders straight lines as they appear in real life, wherever they are in the scene. Wide-angle lenses have short focal lengths, which is the distance, when a lens is focused on the farthest point possible, between the optical center of the lens surface — that is, the point in the lens, often at its center, where there is no distortion of light passing through it — and the film or sensor that receives the image. Short focal lengths allow wide-angle lenses to capture a wide angle of view. The edge of the image is stretched far to the left, right, top or bottom of the center of the captured scene [source: Atkins].

But while wide-angle rectilinear lenses can capture angles of view approaching 100 degrees, fisheye lenses can stretch that to 180 degrees — impossible to do without the light-bending science they employ. The tradeoff is distinct: Straight lines anywhere but dead center in the fisheye image appear to curve. The farther they are from center, the greater the curved distortion. This offers fun artistic avenues to explore, but it's also very useful. Some of the earliest fisheyes, for example, were built by astronomers to capture images of the starry night sky. In the digital age, these lenses allow one security camera to monitor a wide swath of property without moving, and automakers employ them as tiny backup cameras to help drivers stay safer on the road [source: Hughes].

What Is a Fisheye Lens?

The term "fish-eye" actually predates the lens of that name. Physicist R.W. Wood presented the term in a 1906 article, "Fish-Eye Views and Vision Underwater." The hobby of keeping fish as pets was booming, thanks to the development of early home aquariums, and Wood offered a scientifically based description of how pet fish might view the world outside their glass tanks [sources: Kingslake; Lomography].

To understand what Wood described, take a chopstick and stick it into a glass of water. The straight piece of wood will appear to bend where it enters the liquid; this is an illusion caused by refraction, light bending as it goes form one medium (air) to another (water). This is the fundamental phenomenon that allows a fisheye lens to reach far to the sides of a scene and pull in the visual information at the edges of the frame.

Whereas a rectilinear lens is designed to behave like a window as light moves as straight as possible through its series of elements, the fisheye lens uses its elements like a funnel, bending a wide angle of light captured by the extremely curved outer element of the lens toward the film or sensor inside the camera. The fisheye's signature distortion comes from this funnel-shaped path: Light at the edges of the frame has to bend further to reach the film or sensor, resulting in greater distortion [sources: Atkins; Kingslake].

Lens maker Beck of London produced the first fisheye lens, labeled a "whole-sky lens," in 1924 for meteorologists and astronomers. As the name implied, the lens was intended to capture wide swaths of the sky in one shot. Scientists could then use geometric principles to account for the distortion, allowing them to measure the distances between and sizes of objects captured in the image. Other manufacturers followed suit over the next several decades, producing lenses with wider angles of view and greater clarity, with Nikon releasing the first interchangeable fisheye lens for 35mm cameras in 1962. This lens measured 8mm (the focal length) with an F/8 (the maximum aperture, or how wide the shutter can open to allow light through to the camera's film or sensor), and it brought fisheye photography to the consumer market. Hobbyists and professionals alike began to explore artistic ways to make use of this lens' signature distortion [source: Lomography].

The digital photography revolution means you can achieve the fisheye effect without owning one of these unique lenses. Most photo editing software programs offer a "spherization" filter, which essentially distorts a square image into a circular shape. While this won't let you capture the extremely wide angle-of-view of a true fisheye lens, it's an easy way to give your digital photos a different look. 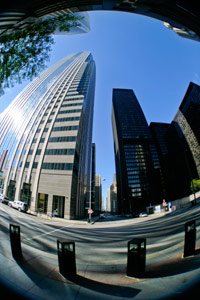 Photography's dual nature fascinates me. True, a painter can capture a scene in a range of ways, from dead-on reproduction to work that is unrecognizable but for the emotion it evokes. The writer can describe a moment in journalistic prose, or can light his words on fire with the rhythms, links and patterns of poetry. But no other medium can perform photography's Jekyll-and-Hyde trick: one click of the shutter catches a discrete moment in time, exactly as it happened, while a simple change of lenses and another shutter click alters a scene into a distorted other-world, as far removed from reality as a Cubist painting.

That's what makes fisheye lenses and other extreme lenses — such as high-end macro lenses — so interesting to me. These finely tuned devices don't just let us capture the world around us; with practice, they can let us twist the reality in front of us to better translate the deeper messages that inspire us to frame the scene and click the shutter. They're powerful tools when used right, and happily, the journey to becoming an effective photographer is as enjoyable and fulfilling as it is long.