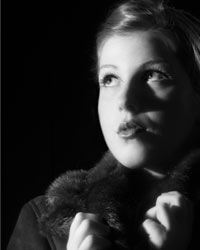 Often, film noir photography evokes bygone eras. The lighting and model styling in this modern photo are reminiscent of the 1940s.
©iStockphoto/Thinkstock

Moody, dark and dramatic. The term film noir may instantly conjure cinematic scenarios in your mind of hard-boiled detectives and brassy dames that drag trouble behind them like tattered coats. But film noir is also a still photography style, largely informed by the movies of the same classification.

Film noir is a term introduced in the 1940s by French critics Nino Frank and Jean-Pierre Chartier. The French word "noir" translates to "black" or "dark," and film noir describes a style of filmmaking rather than an actual film genre. At the heart of film noir is a dramatic story, often filled with crime and sexual exploits. Film noir's defining characteristics, though, are its storytelling style and the cinematography used to capture it [sources: Horsley, Dirks].

Today, film noir is still a highly recognized and well-respected form of storytelling on film. If you admire this style, you may choose to shoot film noir movies or still shots. For the photography, you'll want to create the lighting and camera effects that imitate the best of film noir.

In this article, we cover five tips you can use to shoot your own film noir photography, whether it's still shots or motion pictures. We'll start with the most basic tip needed to create film noir: selecting and placing lights in the scene.