How to Get Great Contrast in Photography 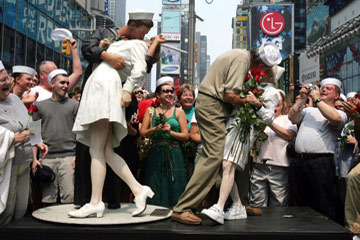 A half-century after the fact, Carl Muscarello and Edith Shain (right) recreate the iconic pose that Alfred Eisenstaedt made famous in his 1945 "V-J Day in Times Square" photo.
Mario Tama/Getty Images

One of the critical techniques for creating powerful, memorable photographic images is contrast. When you look at a famous photograph -- like Alfred Eisenstaedt's "V-J Day in Times Square" -- consider all of the visual elements that make it so striking. Composition is certainly essential, but you should consider all of the contrasting elements in the photo:

But there are myriad ways in which the elements of a photograph can contrast with one another: hard, soft, bright, somber, loud, muted, big, small, centered and isolated [source: Freeman]. The way a photographer balances these elements and situates them dramatically can make the difference between a click of the "delete" button and a masterpiece.

In this article, we'll share a few tips and techniques for making the most of contrast in your photos, whether you're using an inexpensive point-and-shoot or a high-end digital SLR model. Let's start with some tips for taking stunning, high-contrast photographs.