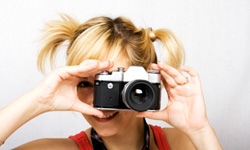 You've shunned the digital revolution and have proudly dusted off your film camera. Or maybe you rescued your mom's or granddad's vintage model from the attic. You've loaded the film, put the strap around your neck, raised the camera to your eye ... and realized that a film camera is actually quite different from your compact digital SLR. What to do?

First of all, realize that you're not alone. According to Kodak's marketing manager, color film is still selling steadily, and black and white film does quite well in the market [source: Sorrell]. And let's not forget the hipster cred that comes with film; as of this writing, Urban Outfitters stores across the United States are carrying retro film cameras and related accessories. That might help explain why digital camera sales dropped 2 percent from 2009 to 2010 -- and film cameras gained a 30 to 40 percent sales boost [source: Golden].

So don't march up to the attic to throw your camera back in a box just yet. With a few tips and techniques, you can be shooting old-school film in no time, basking in the glow of beautiful photographs and jealousy from your digital-only friends.