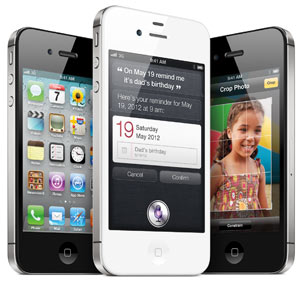 The iPhone 4S looks almost identical to its predecessor, but it contains more processing power.
Image courtesy of Apple, Inc.

Steve Jobs passed away on October 5, 2011. The day before, on October 4, his chosen successor, Tim Cook, hosted the annual fall Apple event to unveil the iPhone 4S. This marked the first time Jobs didn't introduce the new iPhone, but his influence lives on in the device itself. Up until the moment the event started, there was speculation that Apple would name its new phone the iPhone 5 and that it planned to release a modified iPhone 4 as a cheap alternative called the iPhone 4S. That didn't happen. Like the iPhone 3GS, the iPhone 4S keeps the same body design as its predecessor while substantially updating its internal hardware.

The iPhone 4S introduced three major new features: faster processing with a dual-core CPU and GPU; better photography with an 8 megapixel camera; and deep voice control integration through Siri, the voice assistant software we talked about in the iOS 5 section. While iOS 5 is available as a free download for iPhone 3GS and iPhone 4 users, Siri is only accessible on the iPhone 4S and later.

Apple equipped the iPhone 4S with the same 1GHz A5 system-on-a-chip that's inside the iPad 2. The A5 chip contains dual-core CPU and GPU processing, making it dramatically faster than the A4 chip inside the iPhone 4. For processor-intensive purposes like Javascript and graphics-intensive games, the iPhone 4S outperformed all the Android devices on the market as of fall 2011. For example, in the GLBenchmark 2.1 software, the iPhone 4S could push 122 frames per second; the Samsung Galaxy S II managed 67, while the iPhone 4 managed only 15 [source: Anandtech].

The iPhone camera received a similarly big upgrade from 5 megapixels to 8 megapixels. But the image resolution isn't what makes the iPhone 4S camera so much better -- it's the new, larger sensor, which captures 73 percent more light than the one on the iPhone 4. Light sensitivity makes an enormous difference when shooting in low-light situations. Additionally, Apple employed a five-element lens system over the iPhone 4's four-element system to increase image sharpness, and improved the aperture from f/2.8 to f/2.4 to capture more light [source: Tested]. The camera can shoot 1080p video, up from the iPhone 4's 720p video shooting capabilities.

The iPhone 4S marked another significant milestone for Apple's smartphone business: The device launched simultaneously on AT&T, Sprint and Verizon in October 2011. It's the first iPhone that works on both GSM and CDMA networks, the two cellular technologies used worldwide. Dual-radio phones like the iPhone 4S are often called "worldphones." But there's a catch we'll get into on the next page: Only an unlocked iPhone 4S, sold for $650 through Apple, can use SIM cards in foreign countries.