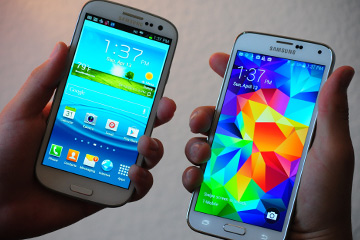 A Samsung Galaxy S5 (R) compared in size to a Galaxy S3 device. The S5 is significantly larger than its generation 3 predecessor. The new Galaxy S5 is the largest of the series and around 3 millimeters wider, 5 millimeters longer, and a fraction thicker than its predecessor. See more cell phone pictures.
© Eduardo Barraza/Demotix/Corbis

Isn’t it great when science fiction becomes science fact? If you’re a little older, you probably wanted a communication device just like the one Captain Kirk used in the TV series “Star Trek” when you were growing up. Kirk and the crew of the USS Enterprise could talk over vast distances with these personal communication devices. Without the “communicator, the order to “beam us up, Mr. Scott” would have fallen on deaf ears, and we all know what would have happened to Kirk if he didn’t have any bars on his device.

Now that we’re well into the 21st century, our “communicators” make the ones on “Star Trek” seem like antiques. Not only can we talk to one another on our smartphones, but we can text, play music or a game, get directions, take pictures, check e-mail, find a great restaurant, surf the Internet, watch a movie. You get the idea. Smartphones are cell phones on steroids. Why is that?

Unlike traditional cell phones, smartphones, with their big old memories, allow individual users like you and me to install, configure and run applications, or apps, of our choosing. A smartphone offers the ability to configure the device to your particular way of doing things. The software in the old-style flip phones offers only limited choices for reconfiguration, forcing you to adapt to the way they are set up. On a standard phone, whether or not you like the built-in calendar application, you’re stuck with it except for a few minor tweaks. But if that phone were a smartphone, you could install any compatible calendar application you liked.

Here's a list of some of the additional capabilities smartphones have, from intuitive to perhaps less so: