Fre­e stuff is good, and free stuff that you'd ordinarily have to pay for is even better. That's one of the reasons people have tried using Voice over Internet Protocol (VoIP) to make phone calls. With VoIP, you can make calls, even long-distance and international ones, for free. But until recently, VoIP had one pretty big limitation -- to make a call, you had to be at a computer.

New phones make it possible for people to place VoIP calls without being leashed to a computer. WiFi phones use the same wireless network technology that computers use, making VoIP a lot more portable.

This article will explore WiFi phones and their abilities, as well as the pros and cons of using them. We'll start with a quick review of VoIP and WiFi.

Understanding VoIP is easier if you have a basic understanding of how old-fashioned telephones work. Most people have used an ordinary "land line" phone so often that the process seems instinctive. You just pick up the phone, hear a dial tone, dial, talk and hang up.

­ But several things happen between you dialing the phone and the other person answering. To get from person to person, the call travels through the wires that make up the public switched telephone network (PSTN). Your local phone carrier routes your call through a series of physical switches that eventually connect your phone to the other person's. This is called circuit switching.

This isn't a particularly efficient way of making phone calls. The entire circuit between the two phones stays open during the conversation, even though only one person is talking at a time. It's also open when neither person is talking. (See How Telephones Work for more details on circuit switching).

Wi-fi phones are part of the smartphone phenomenon. Click here to read more about smartphones.

Let's say you and a friend who uses the same VoIP service are going to talk to each other. You're using analog telephone adapters (ATAs), which let you plug your regular phones into your computers. Here's what would happen:

It's an efficient process -- and it doesn't tie up the line when it doesn't need to. It can also be free. If you're using a free service, like Skype, and calling someone else who also uses the same service, your call costs you nothing. But you might want to make phone calls when you're away from your computer, or you might just want to walk around while you talk.

With 802.11 networking, or WiFi, VoIP can go wireless. A WiFi phone has an antenna that transmits information to a computer, base station or wireless router using radio waves. An antenna at a base station or router picks up the signal and passes it on the Internet. You can read more about this process in How WiFi Works.

Let's look at these phones in more detail.

Some VoIP services offer a cordless handset that communicates with a base station that plugs into your computer's USB port. These are more like cordless phones than mobile phones. They're not really WiFi phones since they're not capable of connecting to a WiFi network. 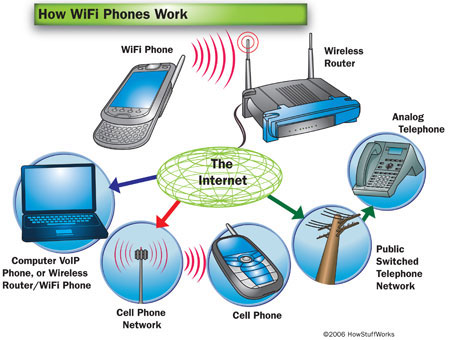 From their user interface to how they work, WiFi phones are a lot like cell phones . Like a basic cell phone, a WiFi phone has a printed circuit board (PCB) that connects:

When you make a call on a WiFi phone, you dial the number of the person you want to call, just like you would with a cell phone. If you're calling another VoIP user, you may enter a VoIP address instead of a phone number, depending on the service provider's requirements.

The phone translates the number you dial into packets of data. It uses radio waves to transmit the packets to a wireless receiver. The receiver passes the information over the Internet to the call processor like an ordinary VoIP call. When you begin your conversation, the phone transmits your voice in packets of data as well. Your voice travels just like it does in a VoIP call, although the specifics can differ from one provider to another.

Many of these phones use a specific WiFi service or network. For example, Netgear makes a WiFi phone for Skype service, and UTStarcom makes a WiFi phone for Vonage service. In order to use either of these phones, you need to have an account with that provider, just like you need a service plan from a cell phone provider to use a particular phone. Either you or your service provider will configure the phone to work within the network.

Other phones work with a protocol rather than a particular network or provider. For example, ZyXEL and Linksys both make WiFi phones that use Session Initiation Protocol (SIP). SIP is one of several VoIP protocols -- you can find out more about them at Protocols.com. After setting up a SIP phone, you can make calls simply by entering the other party's SIP address and pressing "Send."

SIP is an open protocol. Anyone can use it, and anyone who has a SIP address can contact anyone else who has one for free. SIP is a standard protocol for handling voic­e data, and many VoIP providers use it, even though they maintain a closed network. It can also control other forms of communication, like instant messaging and video conferencing.

Some new cell phones use both WiFi and cellular frequencies. These hybrid or dual-mode handsets can change back and forth between the two networks. The phone can take advantage WiFi networks when they are available and can use the cellular network the rest of the time.

The Future of Wireless VoIP

WiFi phones have a lot of potential, but right now they're not for everyone. Someone who has a cell phone and needs a phone line to support their DSL connection doesn't necessarily need yet another phone. Anyone who lives in an area with little WiFi availability might not find many places to use a WiFi phone. People who don't have a network of friends using the same VoIP service may find it cheaper to use a land line or cell phone.

But as more cities develop city-wide WiFi networks, WiFi phones will become more practical and useful. What currently seems like a novelty or a toy could become a replacement for a land line, a cell phone or both. It could happen pretty quickly -- the WiFi phone market increased by 76 percent in 2005, and researchers believe it will double in 2006 [Source: Infonetics Research].

WiFi phones are already useful on a smaller scale in businesses and schools. Many businesses have company-wide WiFi networks and VoIP phone service, making WiFi phones a potential replacement for desk phones. Students who live on college campuses that have extensive WiFi networks can also use WiFi phones to make calls for little to no money.

In spite of all its promise, the technology is still new, and WiFi n­etworks aren't yet prevalent enough to make the phones practical for everyone. Users have also reported some quirks in newly-released phones that make using them a little tricky. For example, some phones reset every time the user moves to a new wireless network or every time an administrator makes a change to an existing network. Some WiFi hotspots require a Web browser to sign in. Phones without a built-in browser are useless in these locations.

Even though VoIP doesn't use a lot of bandwidth, other uses for public and corporate WiFi networks do. Sharing bandwidth with a lot of other traffic can result in poor voice quality or lost signals. Fortunately, quality-of-service requirements can be built in to new WiFi networks. With the right hardware and software, a hotspot can separate and prioritize the voice traffic, treating it as a separate signal and providing better voice quality.

While they're currently more like toys than tools, WiFi phones will probably become a lot more popular as WiFi networks spread. For more information on WiFi, telephones, cell phones and related technology, see the links on the next page.

VoIP services don't always support emergency phone calls. In the United States, some VoIP customers can dial 911, but the system can't transmit the caller's location to the dispatcher. Other providers transmit the address and phone number that are on file, which won't help the dispatcher if the person is traveling. Using a WiFi phone with a VoIP service adds another difficulty. There's currently no way for the dispatcher to determine the precise location of a person who places a 911 call through a wireless network.

How Does Google Maps Predict Traffic?
What parts make up an iPhone screen?
What is Google Wallet?