by Jason Wright
NEXT PAGE 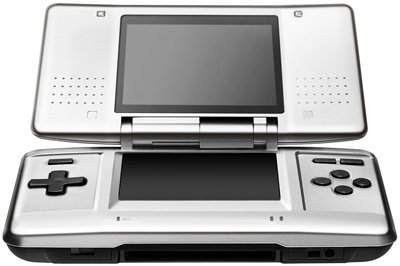 ­ Here's a question: What happens when one of the world's largest electronics companies makes a move to edge its competition out of the top spot in the portable gaming industry? If you're Nintendo, and Sony has made it clear that it wants to crush you with its new PlayStation Portable, you throw a curve ball and try to beat Sony with what you do best: innovation.

Nintendo's latest innovation is not a bigger, faster processor. Nintendo's latest foray into the handheld market, a market it practically owns thanks to the legendary Game Boy -- is the DS. "DS" stands for either "dual screen" or "developers' system," depending on which way the wind's blowing, and it's a cross between two Game Boys and a PDA, with a cell phone's messaging function thrown in for good measure. And the DS's new sidekick, DS Lite, has all the handheld glory of the DS plus brighter screens and a smaller, lighter, easier-to-pocket package.

So what's the big deal with the little DS? On the surface, it's just a larger, two-screened Game Boy. However, with its laundry list of handheld firsts, a multitude of possibilities are now open to game developers.

In the next section, we'll take a look at each of these features.