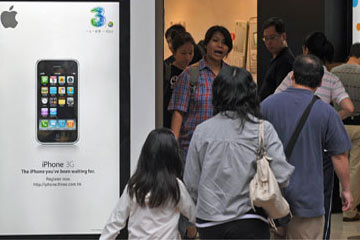 In June 2008, Steve Jobs unveiled the 3G iPhone at a conference for application developers. Apple offered 8 and 16 GB options of the 3G edition of the iPhone. The phone's appearance only changed a little bit -- this model has a slightly sleeker design and its back isn't silver. Customers who bought the 16 GB model could choose between an iPhone with a black or white plastic back. The 8 GB model was only available in black.

Perhaps the biggest announcement -- apart from the fact that the phone could take advantage of 3G network technology -- was that the 3G iPhone had a GPS receiver. One of the challenges of GPS devices is that they tend to drain batteries pretty quickly. That's because the device is constantly receiving signals from satellites orbiting the Earth.

Another important addition to the iPhone was support for Microsoft Exchange. Microsoft Exchange support means users can now synchronize their iPhones with their Microsoft Outlook accounts. By adding this feature, the iPhone became more competitive with other enterprise smartphones -- the phones businesses use to keep executives and employees connected when out of the office.

When it released the original iPhone, Apple didn't support third-party applications, though that didn't stop developers from writing them. But with the original iPhone, in order to even run a non-Apple application, an iPhone owner had to first jailbreak his or her phone. Jailbreaking just meant the owner could load and run third party applications. But it came with a risk -- if you tried to install official updates from Apple with a jailbroken phone, Apple could tell that some hanky panky was going on. But the 3G iPhone acts as an application platform, and Apple encourages developers to create content for it.

The transfer to the 3G iPhone didn't go without a hitch. Instead of allowing customers to purchase phones and activate them at home, Apple wanted them to activate the phones inside the store. Unfortunately, Apple's systems suffered an overload, causing massive delays during the product launch. Most customers ended up having to activate at home anyway.

Some of the new applications that became available when Apple opened up development for the iPhone take advantage of the device's accelerometer feature. Games like "Super MonkeyBall" let the player control the game character by tilting the phone in different ways. Could the iPhone become the next portable gaming platform? That's precisely what Apple claimed at its Sept. 9, 2009 press event. That brings us up to the iPhone 3GS.

To get an application into the iTunes App store, Apple must approve it first. Apple retains the right to deny any application that duplicates or damages the features of the iPhone. This has led to controversy -- in 2009, the FCC stepped in to investigate claims that Apple rejected Google Voice applications unfairly.