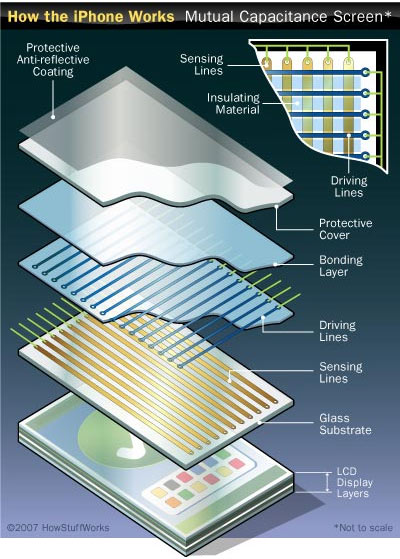 The many component layers in a mutual capacitance screen.
©2007 HowStuffWorks

To allow people to use touch commands that require multiple fingers, the iPhone uses a different arrangement of existing technology. Its touch-sensitive screen includes a layer of capacitive material, just like many other touch screens. However, the iPhone's capacitors are arranged according to a coordinate system. Its circuitry can sense changes at each point along the grid. In other words, every point on the grid generates its own signal when touched and relays that signal to the iPhone's processor. This allows the phone to determine the location and movement of simultaneous touches in multiple locations. Because of its reliance on this capacitive material, the iPhone works only if you touch it with your fingertip -- it won't work if you use a stylus or wear non-conductive gloves.

The 2012 iPhone 5 replaced the previous touch screen with an in-cell touch screen that still uses capacitive multi-touch technology, but combines the capacitive touch sensing layer and the LCD display layer into one.