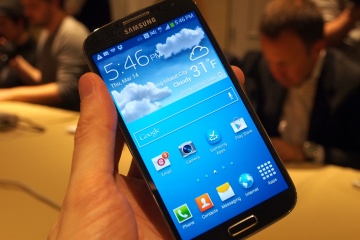 Samsung is marketing its Galaxy S4 phones up against iPhones, touting the larger screen and HDMI connector for TV-out as trumping features.
© Daniel Schnettler/dpa/Corbis

The iPhone 4S set records as Apple's fastest-selling phone -- the company moved more than 4 million units in the device's first weekend on the market [source: CNET]. And the iPhone 5 beat that record by selling around 5 million units on its debut weekend.

The iPhone 5c and 5s, however, took Apple to even greater heights. After only three days of sales, around 9 million of these new phones had been sold, making these iterations of the iPhone the most popular by far, and providing the company with a riposte to critics who say post-Steve Jobs Apple is losing its innovative edge. Many of the new sales were attributed to the fact that for the first time, China's market was included in the iPhone's rollout [Source: Reuters].

The iPhone has gotten a lot of attention in the press, but other phone models already have similar features. As of late 2013, phones running Android, the mobile operating system designed by Google, were leading the smartphone OS arena at nearly 80 percent versus Apple's 17 percent [source: Fox News].

However, the Android share is spread out over many devices and manufacturers. Apple reaps all the rewards from iPhone sales. What's more, Apple's strategy has always been to maximize profit margin and not market share.

The iPhone changed the face of the phone market as we know it. While "smartphones" existed before the iPhone, Apple's focus on touch controls pushed the industry in a new direction. The once-common Windows Phone 6.x line was phased out in favor of an entirely new operating system with Windows Phone 7. RIM's BlackBerry line has been in decline for years. Android has given Apple its most serious competition with an open source OS embraced by a range of electronics companies.