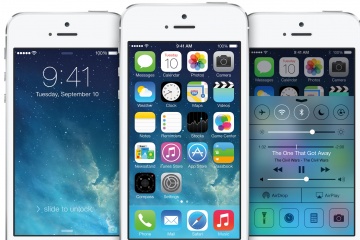 The new mobile operating system has new features and a very different look than its predecessor.
Image courtesy of Apple, Inc.

A few advance reviewers bashed the latest iPhones as rather stale in terms of hardware. However, iOS 7 includes whole lot of major changes for Apple devotees to process.

First and foremost, the overall visual interface is quite different from older versions of iOS. It's considered the biggest overhaul for the operating system since 2007. In iOS 7, gone are the frilly graphical flourishes, such as faux leather for the calendar app and wood for the Newsstand app, replaced by a simpler, stripped-down appearance. There are new icons and fonts, transparency effects, and advanced graphics physics designed to make the display look more three dimensional.

The so-called live wallpapers are on prominent display in this iOS. These wallpapers feature on-screen bubbles that float about in different directions depending the phone's orientation.

Beyond the eye candy, there are plenty of changes in the way iOS actually works, too. One of the most notable updates is Control Center access. Just swipe up anywhere and you'll have immediate access to wireless options, screen brightness, flashlight, airplane mode and music controls.

The burgeoning App Store, which is at around 900,000 apps and counting, has improved search capabilities. You can filter apps by their popularity in your geographical location, and you can filter them by age appropriateness, too, which should please some parents. Apps can now update automatically in the background instead of requiring your manual intervention.

iOS 7 integrates with iTunes and a range of cloud-based capabilities. Instead of playing only tracks stored to the device itself, you can access music stored in iCloud. There's also the long-overdue ability to build Pandora-like radio stations around specific artists and songs.

Apple's Web browser, Safari, now has a combined URL and search text box. That simply means you can either directly type the Web site you want to access or instead initiate an Internet search. Phones from other companies have been doing this for some time, but this is a first for iOS. Safari also now lets you open just about as many tabs as you want, and then swipe them away once you're done with those pages.

Voice-command app Siri has some new tricks, as well. Simply say "increase screen brightness" or "turn on WiFi," and Siri immediately does so. You can choose new voices and languages for Siri, too.

The version of iOS is also slated for all kind of in-vehicle integration. In 2014, about a dozen car makers will offer displays that communicate directly with the iPhone. Simply speak a command and the car will read back messages to you (and let you speak replies), let you control the music system, and of course, control mapping capabilities.

AirDrop is now integrated into the OS. With AirDrop, you can use your iPhone to share files with other Apple products through a WiFi signal.

The Camera app allows live previews of various creative filters. You can also swipe between various frame shapes (such as panoramic or square).

There are dozens of other minor tweaks to iOS, all designed to make a complicated device easy to use. Later, you'll see how Apple's newest iPhone stacks up against the competition.