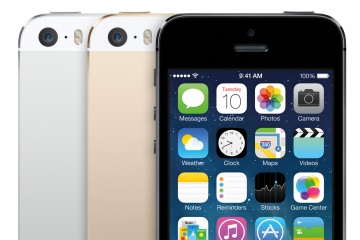 The iPhone 5s is available in gold, silver or “space gray.”
Image courtesy of Apple, Inc.

On Sept. 10, 2013, Apple announced new versions of its iPhone 5, named the iPhone 5s and 5c. The former is an all-new phone, featuring updated hardware and capabilities, while the latter is a minor update on the older iPhone 5.

The 5c is intended as a budget-friendly device, and with a two-year contract the 16GB version sold for $99 when it premiered in the U.S. The 32GB model sold for $100 more. One of the phone's key marketing points is color -- instead of a metal case, consumers can choose from a plastic exterior that comes in five different hues. Although the colors may be different, the guts of the phone are still the same as the iPhone 5.

However, the 5c's battery and antennas are different than the iPhone 5. The battery has a higher capacity, and thus will store a longer-lasting charge. Apple says that the antennas will support more frequencies worldwide than any other smartphone.

In terms of media hype, most focus went directly to the iPhone 5s, which features significant hardware changes.

Apple overhauled the iconic home button by adding an integrated fingerprint sensor. After registering a fingerprint with the device, a simple fingertip press unlocks the phone, authorizes online purchases and completes other actions that require heightened security.

This capability is called TouchID. The sensor can read sub-surface skin layers at a resolution of 500 pixels per inch and at any angle. You can register more than one person on the phone so that multiple people can access secure functions. Although hailed as a step forward in user-friendly security, the feature was defeated by a computer club just a few days following the phone's release [source: Diaz].

Instead of the A6 chip, the 5s sports a new A7 processor, which is the first 64-bit processor ever built into a smartphone. When running apps optimized for 64-bit functionality, the processor should result in faster and more efficient performance.

Apple built in a secondary processor called the M7, which is dedicated to handling signals from the phone's built-in accelerometer and gyroscopes. The M7 chip should shoulder some of the processing load that would otherwise go to the primary A7 chip.

The phone's camera is, like its predecessor, 8 megapixels, but it has some new tricks. Instead of one LED flash, it features two, in white and amber. The idea is that the phone will automatically choose the best flash depending on ambient light, which results in better color balance and improved picture quality. The camera also has a wider aperture (at f/2.2), slow motion video, 10 frames per second burst mode and image stabilization.

Hardware aside, both the 5c and 5s run iOS 7, which is Apple's newest mobile operating system. On the next page you'll read all about iOS's new features.