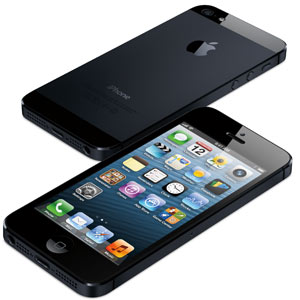 The iPhone 5 is longer and leaner than previous models.
Image courtesy of Apple, Inc.

On September 12, 2012, Apple CEO Tim Cook hosted the company's fall special event and unveiled the iPhone 5. The phone underwent a major redesign this time. Apple managed to reduce the size of many of the internal components and pack them into a tighter space. The iPhone 5 is lighter and thinner than its predecessors, but with the same width and a slightly longer body to increase the screen size. It measures 7.6 millimeters (0.30 inches) in depth, 58.6 millimeters (2.31 inches) in width, 123.8 millimeters (4.87 inches) in height, and weighs a mere 112 grams (3.95 ounces), making it 20 percent lighter than the 4S. The body is made up of anodized aluminum with ceramic glass inlays.

The new phone has a retina display with a pixel density of 326 pixels per inch just like the 4S, but the screen has increased from 3.5 inches to 4 inches (8.9 centimeters to 10.2 centimeters) diagonally, taking the resolution from 960 by 640 pixels to 1136 by 640 pixels. The new resolution makes the aspect ratio nearly 16:9, allowing you to watch widescreen HD video without letterboxing and giving more room for Web sites, e-mail and games, among other things. Some apps are already being developed to take advantage of the new screen size, while older apps will still display correctly by leaving black space on two sides. It also allows for an extra row of apps on the screen. The width was retained so that the phone would remain just as comfortable in your hand as previous phones.

The screen now has the touch sensors integrated with the display, meaning there is one layer with the pixels acting as touch-sensing electrodes, rather than a display layer and a separate capacitive touch sensing layer laid over it. Behind the scenes, there are now two chips controlling the touchscreen rather than one, but despite these differences, multi-touch functionality remains the same. Removing the extra layer makes the phone thinner, and also reduces glare and makes images sharper.

The iPhone 5 includes a new processor called the A6, the first one designed entirely in-house by Apple. Both the CPU and graphics speeds are faster than those of the A5, and it is touted to perform most tasks nearly twice as fast as its predecessor, while keeping battery usage about the same or even slightly lower by working efficiently with the new iOS 6 operating system (to be discussed in the next section). This means faster app loading, faster photo capture, quicker Internet surfing and better gameplay.

The new phone supports more cellular networks than the previous models, adding HSPA+, DC-HSDPA and the new ultra-fast LTE wireless technology (up to 100 megabits per second download) to the mix. A new single voice and data chip and a dynamic antenna can switch connections between different networks. The iPhone 5 works with more WiFi standards than previous versions -- WiFi is now 802.11 a/b/g/n rather than just b/g/n, and its 802.11n is both 2.4 GHz and dual-channel 5GHz with download speeds of up to 150 megabits per second, although this, like the 100 MBPS of LTE, is a theoretical maximum [source: Cook].

The iSight rear-facing camera and FaceTime front-facing cameras both underwent improvements. The iSight's lens is now made of sapphire crystal, nearly as hard as diamond and more difficult to scratch. Lens alignment was made more precise, and a new dynamic low-light mode makes it work better in dim situations. The FaceTime's video quality has been upgraded to 720p high-definition, and it now has backside illumination. The iPhone 5 also has three microphones, located on the bottom, front and back of the phone. They allow for noise cancellation and beamforming, techniques that improve audio quality.

The traditional 30-pin connector has been replaced with Apple's Lighting connector, which is 80 percent smaller. The bad news is that many existing accessories are only compatible with the 30-pin connector. The good news is that there is a Lightning-to-30-pin adapter available for purchase, and that the new connector is reversible, meaning no more instances of trying to insert the connector the wrong way and having to flip it over.

The device also comes with new redesigned EarPods rather than the traditional EarBuds. The EarPods reportedly provide higher-quality sound and fit more comfortably into a wider variety of ear shapes than their predecessors EarBuds.

About 5 million units of the iPhone 5 were sold during the first weekend of availability, breaking the sales records of the iPhone 4s [sources: Satariano, Martin].

Read on to find out about the new version of iOS unveiled alongside the iPhone 5.