by Jacob Silverman
Next 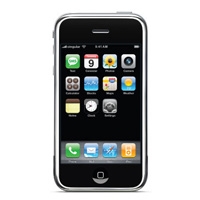 For several years, Apple enthusiasts have been asking each other the question, "Does it exist? Is Apple really making a cell phone?" Rumors came and went, but Apple, a company known for its secrecy about products in development, said nothing. In the last six months, those rumors began to take on a life of their own as industry analysts joined the blogosphere in predicting that Apple would produce a phone sometime in the first half of 2007. In mid-November, news broke that Apple had placed an order with Hon Hai Precision Industry, Co., a longtime Taiwanese manufacturing partner, for 12 million units of a new device believed to be the fabled "iPhone" [Forbes]. That news sent the rumor mill into overdrive, but Apple and Steve Jobs, the company's chief executive officer, again said nothing. Analysts began issuing predictions of cost, features and when the phone would be available, with many of them claiming to have inside information. Given Apple's extraordinary track record with the iPod and its recent innovations in desktop and laptop design, expectations were very high, perhaps impossibly so.

On January 9, at Apple's annual product showcase, Macworld Expo, Jobs finally revealed the already legendary phone, and it's beyond what anyone expected. Jobs briefly tricked his audience during his Macworld Expo keynote address, announcing three new Apple products: a widescreen iPod, a cell phone and an "Internet communicator." Each announcement drew thunderous applause from the crowd, but what Jobs then revealed was that these three products were actually all part of one device -- the Apple iPhone.

Touted as a "revolutionary mobile phone," the iPhone can make calls, play music, navigate the Web, edit photos, play movies and text message, among many other capabilities. Although many of the iPhone's functions can be found in other devices, the iPhone appears to be unique in that it seamlessly blends these abilities together, while also throwing a bevy of innovations into the mix.

Jobs demonstrated many of the iPhone's features for the audience. One sequence began with a call from Phil Schiller, Apple's senior vice president of Worldwide Product Marketing. Jobs answered the call on his iPhone, added Schiller to his address book, and when Schiller asked for a photo, Jobs emailed it to him -- all while continuing the call. Later Jobs showed off the phone's ability to integrate multiple applications by using the integrated Google maps application, which knew his location, and typing in a search for Starbucks. Every Starbucks location in San Francisco showed up on screen. Jobs chose one and in a few minutes he was on the phone with Starbucks, ordering 4,000 lattes before abruptly hanging up.

In order to seamlessly integrate Web, phone, media and messaging features, the iPhone employs remarkable, groundbreaking technology. Unlike traditional smartphones that have small, finger-cramping keyboards, the iPhone has only one button for "home." Instead, its 3.5-inch high resolution, color screen, which occupies most of the phone's face, doubles as a "multi-touch" display. The display shows different controls based on what you're doing. If you're typing a text message or e-mail, a keyboard appears at the bottom of the screen, and you can easily type a message and send it to someone from your address book. The multi-touch technology also has an auto-corrective feature that accounts for unintentional taps and corrects misspellings. For music and video, volume and playback controls appear on the screen, and so on for other applications.

The iPhone's multi-touch interface also allows the opportunity for innovative uses of the touch display. When viewing a photo or surfing the Web, simply perform a pinching motion with two fingers, and the photo or Web page zooms in. Spread two fingers apart, and the display zooms out. Scrolling in any application is done by just brushing a finger up or down on the screen.

An intriguing innovation in the phone is what Apple calls visual voicemail. No longer will you have to listen to all of your voicemails if you don't want to. Instead, they will appear in a list, much like an e-mail inbox, and you can simply point to the voicemail you want to play.

Apple has also integrated three sensors into its phone. One is an accelerometer, and it senses when you turn the phone on its side, automatically shifting the display to a landscape mode. This feature is incredibly useful for viewing panoramic pictures, videos or shuffling through your albums, which you view by their cover art. A second sensor detects ambient light and adjusts the screen's brightness accordingly in order to save power. The third sensor deactivates the screen when you bring the phone towards your face, so you won't be dialing with your cheek while talking on the device.

Like many of Apple's products, iPhone syncs easily with a Mac or PC. The phone runs a version of Apple's reliable OSX operating system, and its programs and iPod connector (located on the bottom of the phone) will be familiar to many Mac users. Use the iPod connector or a docking station to connect the phone to your computer, the iPhone will automatically sync your address book, photos, movies, music and bookmarks between the computer and the phone.

Now, all of this may sound great, but there are a few catches. First, the iPhone isn't available until June -- Apple needs to get FCC approval before the iPhone can start using a radio band. Second, Apple has an exclusive contract with Cingular through 2009, so if you want a iPhone, you'll have to be a Cingular customer. And third, it's not cheap. A 4 GB iPhone will set you back $499 with a two year service plan, while an 8 GB iPhone will cost $599 with a two year plan. Still, when compared to other high end smartphones, you're getting a lot. This is essentially a small, powerful computer in the palm of your hand, and of course it has Apple's famous sleek, stylish, minimalist design.

Here's a quick rundown of some of the iPhone's other features:

So will the iPhone change the cell phone industry forever? That depends on who you ask. Keep in mind that very few people have even used the iPhone. But given Jobs' impressive demonstration and Apple's recent track record -- over 100 million iPods and 3 billion songs sold -- it's difficult to doubt that this is an extraordinary and important product. Apple's stock surged 7 percent on the day of Jobs' announcement and appears headed for record prices.

In other news, Cisco has filed suit against Apple for infringing on Cisco's trademarked "iPhone" name. Apparently, Apple and Cisco were in talks to negotiate the licensing of the name "iPhone" for Apple's product, but they had not yet reached an agreement when Jobs announced the product at CES.

Stay tuned to HowStuffWorks for a full article on How iPhone Works closer to its June release date. For more information on iPhone and related topics, check out the following links: