How do I play in a group? 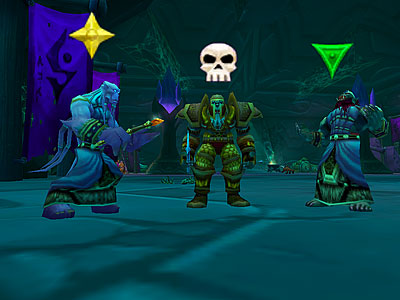 Tanking, healing and CC assignments can seem overwhelming, especially in very large groups, but "World of Warcraft" has built-in ways for players to keep up with what's happening. One is a set of raid icons, which some players refer to as "Lucky Charms." Party and raid leaders can use these to label specific targets with symbols visible to everyone in the group. There's no hard-and-fast rule about which icon stands for which action, but most players use the skull icon to mark the mob that the DPS should focus on. Some party leaders will move the skull from target to target as necessary, while others will tell the group which icon to target next.

You can also create a simple assist macro. This is a macro that will cause your character to target the tank's target every time you click it -- in other words, you'll attack what the tank is attacking. If your tank is trying to keep the aggro from multiple mobs, be careful -- he or she may change targets to keep the attention of all of them. To create this macro:

More complex macros can look a little like a programming language that instructs the game to perform specific actions. You can find lots of useful macros in the "World of Warcraft" official forums, and you can learn more about them from the official macro guide.

Here's how a five-person group can use these tools to move through an instance:

Group play is more than just a set of mechanical steps, though -- there are social elements involved as well. We'll explore them on the next page.

Why Are Dungeons Called Instances?

In most parts of Azeroth and Outland, players have to compete for resources and mobs. This isn't the case in dungeons. Each group gets its own copy, or instance, of the dungeon. No one else can come inside, and there can be many copies of the same dungeon happening simultaneously.