How do I play World of Warcraft? 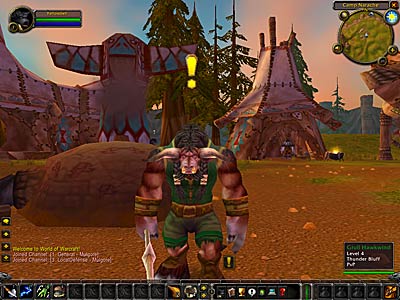 "World of Warcraft" introduces your character to the world in a starting zone. Right away, a new character can find a small village with a few computer-controlled, non-player-character (NPC) inhabitants. These NPCs include quest givers and vendors who sell items and can repair your armor, which becomes damaged during combat and when your character dies.

When you talk to a quest giver, a description of the quest and its reward will appear in a small window on your screen. You can accept or decline the quest. If you accept it, the quest's description will appear in your quest log. You can access your quest log by pressing the "I" key on your keyboard or by clicking the button on your toolbar that looks like a goblet. Your quest log will tell you which of the quests are complete, which will most likely require the help of a group and which require you to go into an in-game dungeon, also known as an instance.

The quests are usually pretty self-explanatory. For instance, you may have to:

Once you finish the quest's requirements, you can turn the quest in to collect the reward. You'll usually turn the quest in to the same NPC who gave you the quest, but sometimes you'll need to talk to someone else. When this happens, the name of the NPC you need see will be in your quest log. You'll see a yellow question mark over the head of the person you need to talk to, and you'll also see a yellow question mark on your mini-map marking the NPC's location.

When you turn in a quest, you gain experience -- you get experience from killing enemies, also known as mobs, as well. However, since a quest has its own, relatively large experience reward, getting experience through questing is usually more efficient than just killing mobs, which is also known as grinding.

Once you've finished all the quests in your starting village, you'll generally pick up a quest that requires you to travel to a neighboring village. There, you'll find more quest givers and slightly more powerful mobs. The game continues in this fashion until you reach the highest possible level -- level 60 for classic "World of Warcraft," level 70 for "The Burning Crusade" and level 80 for "Wrath of the Lich King."

When you're finished with your starting zone, the world suddenly gets a lot bigger. We'll look at how to get around it in the next section.

What Happens When You Die?

Dying in "World of Warcraft" is more of an inconvenience than a life-altering event. If you die, you will appear as a spirit in a graveyard. If you travel back to your body, you'll be resurrected with about half your health and mana. Dying damages your armor by 10 percent, so you'll have to pay a little money to repair it. If you can't get back to your body -- or if you just don't want to try to fight your way back from where you died -- you can ask the spirit healer in the graveyard to resurrect you. This will damage all of your armor, including armor you're carrying but not wearing, by 25 percent. You'll also have resurrection sickness -- all of your stats will be reduced for 10 minutes.