How is group play different from solo play? 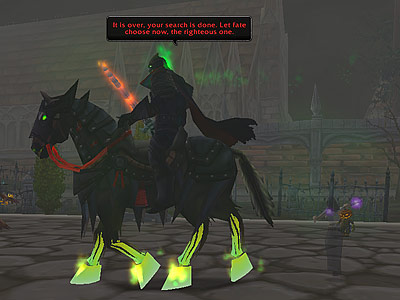 When you're playing "World of Warcraft" on your own, you basically try to kill mobs before they kill you. You also claim 100 percent of the mob's loot and experience. But group play is a little different. You share loot and experience with the other party members, and, ironically enough, trying to kill an enemy as fast as possible can lead to disaster. Instead, you have to use your skills and abilities to the benefit of the whole party.

Your classes and talents, discussed in the "Warcraft Characters" section, have a huge impact on your role in a group:

In raids, or instances that require more than five players, there are often multiple tanks, also known as off-tanks, and multiple healers. Often, raid leaders or class leaders will give these players specific tanking or healing assignments.

Many classes also have the ability to temporarily incapacitate, or crowd control (CC), mobs. In difficult encounters, CC can be extremely important -- it keeps the group from having to defend themselves against too many monsters at one time. The party must make sure not to attack these mobs -- most forms of CC break when the mob takes damage.

There are lots of forms of crowd control in the game. Here are some examples of the ones commonly used in instances:

This may sound complex, but there are lots of tools for making it easier to keep up with who's responsible for which mob or character in the instance. In the next section, we'll look at some of them.

Several addons can be very useful for learning the mechanics of group play. These include:

You can find these and other addons at sites like Curse and WowAce.