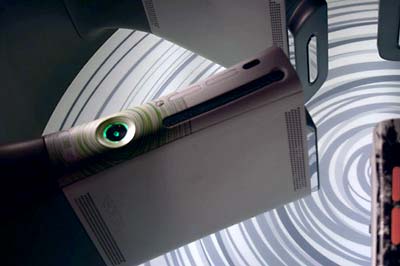 The Xbox 360 is WiFi-ready so that gamers can jump on Xbox LIVE wirelessly.

Xbox LIVE is an online subscription service that allows Xbox gamers to play video games together and download additional game content using the Internet. Once online, gamers can play one another over the Internet and talk to each other in real-time using the headset (included in the bundle). Xbox LIVE has created a huge online community of gamers challenging one another worldwide. The Xbox 360 will also usher in the next generation of online game play and online community with the new, revamped Xbox LIVE.

The new Xbox LIVE has enhanced matchmaking and feedback systems as well as voice chat and video conferencing. It has a new, more seamless interface and is a generally more robust system for communicating during online gaming. Xbox LIVE on the 360 is divided into two services: Xbox LIVE Silver and Xbox LIVE Gold.

Xbox LIVE Silver is a free service that ships with all Xbox 360s and allows any Xbox 360 user with a broadband connection to get online and create a gamer tag as well as a new ID type called a gamer card. The gamer card is a profile that displays a gamer's interests, skill level, competitiveness and gaming accomplishments. In addition, gamers can use Xbox LIVE Silver to chat, download content and play certain games. Xbox LIVE Silver allows gamers to access most of the features of Xbox LIVE. The one key feature missing from the free service is the ability to play multiplayer games online.

In order to play in multiplayer matches online, you must upgrade to the subscription service known as Xbox LIVE Gold. The Gold service has all the functionality of Silver plus the ability to play multiplayer games. Additionally, Xbox LIVE Gold has exclusive content, tournaments and events.

For more information on this service, see How Xbox LIVE Works.

Serious gamers know the Xbox 360 has a great slate of games available for it. Learn more about Xbox 360 games on the next page.