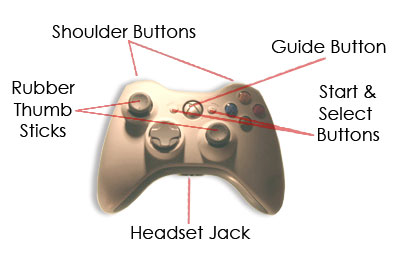 ©2005 HowStuffWorks The new Xbox 360 controller is a familiar

The design for the Xbox 360 controller is based largely on the one used for the original Xbox -- the Controller S.

The wireless controller comes with all Xbox 360 bundles except for the Core system, which includes a wired controller with a nine-foot cable. Everything else about the design is the same. Of course, wireless controllers are available separately if you choose to upgrade.

The new Xbox 360 wireless controllers can be powered by either a pair of traditional AA batteries or a rechargeable battery pack. The battery pack can be "flash charged" in a charger or "trickle charged" via a USB connection to the console, and it alerts the user when its charge is running low.

The Xbox 360 controller has a Guide button in the center of its face that provides a new functionality. This button is divided into four quadrants that light up to provide gamers with different types of information during game play. (Incidentally, the "ring of light" power button on the console also provides this function.) For instance, during a split screen multiplayer match, a particular quadrant will light up to indicate to a player which part of the screen he or she is playing on at that time. The Guide button can also light up to let a player know he has received a message from another gamer. In this case, when the user pushes the button, he or she visits the Xbox dashboard (the equivalent of a PC's desktop). The dashboard provides access to features like messaging friends, downloading content, voice chat and customizing soundtracks, all while staying in the game. The controller has a standard headphone jack on the back so that the user can plug in a headset for voice communication during game play. Some wireless headsets will also work with the Xbox 360.

One of the great features of Xbox 360 is its ability to let players compete against one another online. Learn about Xbox LIVE on the next page.

When the original Xbox was released in 2001, one of the most common complaints about the new console was the controller. Gamers worldwide criticized it for being too large and having poor button spacing. In Japan, where the Xbox sales were already suffering, Japanese gamers all but refused to use the large Xbox controllers, opting instead for smaller, third-party ones. This compelled Microsoft to create a smaller, redesigned controller for Asian markets that was released in winter 2002. Shortly after that, Microsoft released a slightly improved version of the Japanese controller in the west called the Controller S. The Controller S is now the standard Xbox controller that is shipped with all Xbox consoles.