Jacks, Tracks and Other 360 Features 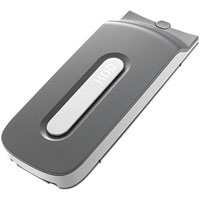 The Xbox 360 supports up to four wireless controllers at once. It also has three USB 2.0 jacks, two in the front and one in the back that can be used to plug in wired controllers for play or wireless controllers when they need to be charged. The USB jacks can also be used to connect devices like digital cameras, MP3 players and computer keyboards to the 360 (but the keyboard can only be used for text entry, not game play).

The Xbox 360 has an Ethernet port to hook up to a broadband connection, as well as a slot for a WiFi card. The 360 is WiFi-ready "out of the box" and the bundle includes a connectivity Ethernet cable.

The Xbox 360 comes standard with both composite and component video connections to hook up to a TV. There are also optional connections for S-Video and VGA, and the console supports some SCART-type adapters used in Europe. The Xbox 360 Core System includes a standard-definition AV cable, while the other Xbox 360 bundles come with an AV HD cable and a media remote.

The Xbox 360 has multi-channel surround sound that supports 256 channels of 48 KHz, 16-bit digital audio. The 32-bit audio processing is handled by the CPU. One of the most talked about new audio features of the Xbox 360 is customizable soundtracks. No matter what video game you are playing, you can play or stream your music during game play.

The original Xbox took a lot of criticism for how large it was. The cooling system that kept the Xbox's rather hefty processor cool was the single greatest factor that contributed to the console's robust size. Microsoft changed all this for the Xbox 360.

In order to fit all that hardware into the stylish and slim form factor of the Xbox 360, Microsoft devised a cooling system that combines a small, vacuum-sealed, liquid-cooled system with fans to maintain a comfortable temperature inside the 360. The system regulates the temperature of the cores and adjusts the flow of liquid and fan speed accordingly. Additionally, the cooling system monitors the core's workload: If one or more cores are not needed for the job at hand (for instance, if you are using the Xbox 360 to watch a DVD), then the unused cores are automatically turned off.

There are dozens of accessories on the market for the Xbox 360, including headsets, wireless controllers, cooling systems, rechargeable batteries and more. You can play compatible Xbox 360 games on your Windows computer with the Wireless Gaming Receiver for Windows. The Live Vision Camera allows players to create an in-game version of themselves in select games. The Xbox 360 Wireless Racing Wheel is a force-feedback steering wheel controller with standard gamepad buttons and floor-mounted accelerator and brake pedals. The Messenger Kit attaches to Xbox 360 controllers and features a keyboard to message other players.

In the next section, we'll take a look at the Xbox 360 controller and how it has evolved from the original Xbox controller.