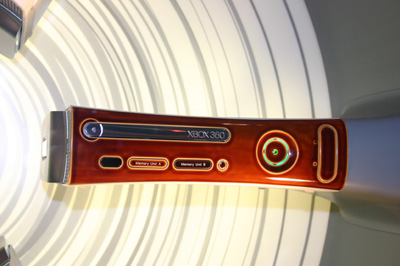 The Xbox 360 with a custom, wood-grain faceplate.

Another powerful asset in the Xbox 360 is the Graphics Processor Unit (GPU). The Xbox 360 boasts the new, custom-built 500-MHz ATI Graphics Processor card with 10 MB of embedded DRAM. While the 500-MHZ graphics processor is powerful, and 10 MB of DRAM provides ample memory for the GPU to do its job, the most innovative thing about this card is that it is built on unified shader architecture.

Shaders are computer programs that determine the final look of what you see on the screen when you're looking at computer animation. Shaders take rendered 3-D objects built on polygons (the building blocks of 3-D animation) and make them look more realistic. There are two types of shaders: pixel shaders and vertex shaders.

Pixel shaders alter the lighting, color and surface of each pixel. This in turn affects the overall color, texture and shape of 3-D objects built from these pixels. Pixel shaders help "smooth out" 3-D objects, giving them a more organic texture. To learn more about pixel shaders, see nVidia: Pixel Shaders.

Vertex shaders work by manipulating an object's position in 3-D space. "Vertex" refers to the intersection of two coordinates in space. The machine maps the position of an animated object in 3-D space by giving it a value. These values are the x, y and z coordinates. By manipulating these variables, a vertex shader creates realistic animation and special effects such as "morphing." To read more about vertex shaders, see What are Gouraud shading and texture mapping in 3-D video games?

In real-time graphics, like the kind you see in video games, shaders work with the graphics processor. The shaders make billions of computations every second to perform their specific tasks. These computations are performed in steps through a series of computational components. Think of an assembly line. In the world of hardware, these assembly lines are called pipelines.

Traditionally, pixel shaders and vertex shaders have dedicated pipelines because each one has very specific and differing needs. As we learned before, the new ATI graphics card in the Xbox 360 has unified shader architecture. What that means is that now, both shader types share the same pipelines. ATI figured out a way at the hardware level to address the needs of both types of shaders using the same pipeline.

The apparent advantage of sharing pipelines is to add more assembly lines, making computation that much faster. ATI claims that this unified shader architecture allows for 48 billion shader operations per second. The Xbox 360 is the first device to use this type of architecture.

On the next page, we'll learn about how the Xbox 360 fits in with your home entertainment system.

According to J. Allard, Microsoft Corporate Vice President and chief XNA architect, in an interview with Gamespot, "If we were building another console in the 3D era, we'd just call it Xbox 2 ... So, we eliminated Xbox 2 from the list. So, the name that we came up with was Xbox 360, because we are putting the gamer at the center of the experience."