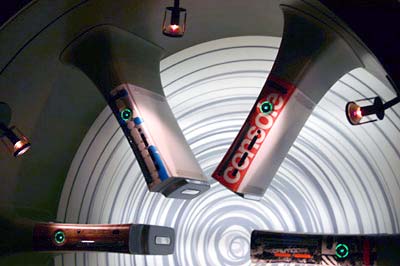 The Core System is "plug and play" -- in addition to the console, it includes a wired controller and an AV cable. The Xbox 360 comes with a wireless controller, an HD AV cable, an Ethernet connectivity cable, a headset and a removable 20-GB hard drive. Initially, it also included a DVD remote, but this is no longer available as part of the package.

The Xbox 360 Elite is similar to the main Xbox 360, with a black case, matching wireless controller and headset. It also includes a larger 120-GB hard drive and an HDMI cable.

To combat Nintendo's surprise powerhouse, the Wii, Microsoft announced the Xbox 360 Arcade in October 2007. Aimed at casual gamers, the console will come with between three and five Xbox LIVE Arcade games and will probably include "Pac-Man," "Uno" and "Luxor 2."

Microsoft has also prepared subtle variations of the console for marketing tie-ins. To commemorate the release of "The Simpsons Movie," Microsoft created a run of 100 limited-edition Simpsons Xbox 360s, which were given away in promotions. Fans of Bungie's "Halo" game series can purchase the "Halo 3" limited edition Xbox 360, which comes in "Spartan green and gold" and features a matching controller.

On the next page we will see what makes the Xbox 360 tick -- the central processing unit, or CPU.

Because of delays in manufacturing, there were not enough Xbox 360s to meet the demand of the 2005 holiday season. As a result, Xbox 360s were selling for as much as $2,000 on Web sites like eBay, and initial sales figures were poor. However, Microsoft still got a jump on its competitors, as the PlayStation 3 and the Nintendo Wii did not release until 2006. According to industry analyst the NPD Group, as of August 2007, the Xbox 360 sold 6.3 million Xbox 360s in the United States, to 4 million of Nintendo's Wii and 1.75 million Sony Playstation 3s.