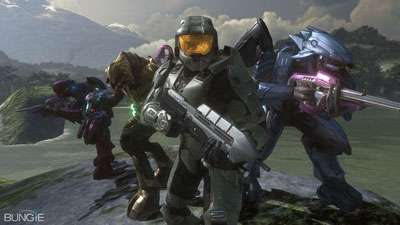 Master Chief and his allies must work together to fight Covenant forces.
Photo courtesy Xbox 360.com

Almost all critics agree that Halo 3 does in fact live up to all the hype and anticipation prior to its release. The wide variety of playing options and addictive multiplayer modes are clearly the high points of the game. Also, the appearance of long-awaited vehicles and weapons pleased a vast majority of players and critics. The new multiplayer options, such as Forge, were also well received, with most people agreeing that they add an interesting twist to the multiplayer concept.

As popular as Halo 3 is, though, it's not without fault. The main point of contention is that Halo 3 doesn't take full advantage of the Xbox 360's graphics capabilities. Halo 2 pushed the limits of the original Xbox, and some people feel Halo 3 failed to do the same with the Xbox 360. Although the graphics are quite good, some critics agree that the game doesn't look as good as it could have.

Another source of criticism is the length of the campaign mode. It takes anywhere from 10 to 15 hours to beat the game, which some people feel is too short. The campaign mode also suffers from the same artificial intelligence problems that the previous titles had. The enemies handle themselves well, but the allies fighting with you seem to lose track of their goal, especially when operating vehicles. It's usually best to drive the vehicles yourself, rather than let the computer-controlled character drive.

Despite the criticism, the solid story and game play easily overshadow these minor imperfections. The popularity of Halo 3 isn't likely to suffer because of a very small percentage of negative reviews. The sales statistics show that within the first 24 hours after its release, Halo 3 easily became the most successful installment of the Halo saga.

For lots more information on Halo 3 and related topics, check out the links below.

A point of controversy among many players of Halo 3 is the infamous eighth level. People feel the sheer number of enemies makes the game too difficult to complete. Others disagree, claiming they've had no problems completing the level.