Halo 3 arrived with a bang. More than 1.7 million copies were preordered in the United States, which gave Halo 3 the record for the highest preselling game in history. Halo 3 set a U.S. sales record for the most money earned in the first 24 hours after release with $170 million, beating out its predecessor, Halo 2, which held the previous record at $125 million.

The next chapter in the Halo saga greeted millions of eager gamers around the world with promises of new features and a much-anticipated close to the storyline, the heart of the Halo series. It's laid out through game play and a series of cinematic-cut scenes. Halo 3 picks up right where the previous title left off, with Master Chief battling the Covenant and the Flood on Earth.

Halo 3 game play builds off the same first-person formula of the previous titles, and this is one of the reasons why the Halo franchise is so popular. The game play is largely the same as the first two games in the series. However, new options bring a new level of excitement to the game.

One of those new options is a co-op mode that lets up to four players work together through the campaign. Halo 3 also has a new Saved Films feature. Think of it as a sort of instant replay of multiplayer or campaign games. Saved Films allows you to save game data, which you then can replay at a later time. You can view the film from almost any camera angle, in slow motion or in reverse. Halo 3 allows you to show the film to your online friends with the new File Share feature. This is basically an online storage system for a wide range of files, such as your Saved Films or multiplayer game types.

In the next section, we'll take a look at some of the new weapons Halo 3 has to offer.

Perhaps the most exciting aspect of Halo 3 is its wide selection of weapons. Along with favorites from the previous games, such as the shotgun, assault rifle and sniper rifle, Halo 3 features a nice assortment of new weapons. The new human weapons add a nice balance to the arsenal:

Some of the Covenant weapons have undergone a facelift, and the new weapons add an interesting twist to multiplayer battles:

We'll take a look at some of the new vehicles Halo 3 has to offer in the next section.

See how the new weapons compare to the weapons we hoped to see in our Halo 3 Wish List.

Another popular element in the Halo series is the variety of vehicles players get to pilot. Both the Covenant and the humans have a selection of vehicles at their disposal, each suited for a wide range of situations. All of the vehicles from the previous Halo titles return, and some of them received major improvements.

We'll take a look at the multiplayer aspect of Halo 3 in the next section.

The multiplayer function in Halo 3 works seamlessly through the Xbox Live system. As many as 16 people can play in a match at one time. This is perfect for large, objective-oriented team matches. Players can choose to participate in ranked or unranked games. The Xbox Live system matches players based on their experience, making the playing field for each match fair for everyone. Multiplayer also takes advantage of Xbox Live's headset capabilities, which allows members on each team to communicate to each other via voice chat. This is useful in matches that involve proper coordination in order to accomplish an objective.

­One of the most interesting features in Halo 3 is the new Forge function. Forge allows users to manipulate the placement of objects, such as weapons and vehicles, on a particular map. A player can move just about anything that exists in the environment. Users can switch to the Forge editing mode at any time during game play and change the attributes and placement for a particular object. For example, someone can change the location of where players spawn after each kill.

The number of objects that can be placed on a single map is limited, so players have a credit system to help manage the number of objects they can use. Each object represents one credit, so when all of the credits are spent, no other objects can be used. Players can regain credits by removing objects from the map.

The endless map configurations Forge allows you to create can make for a unique multiplayer experience. The virtual world around you is constantly changing due to the ability to alter the placement of objects during a match. This makes matches interesting because the placement of weapons can change at any time. With the File Share system, you can save map configurations and share them with friends. Forge puts multiplayer gaming on a completely new level.

The big question with all of these new features is whether Halo 3 lives up to the hype. We'll take a look at some of the criticisms and shortcomings of Halo 3 in the next section.

Almost all critics agree that Halo 3 does in fact live up to all the hype and anticipation prior to its release. The wide variety of playing options and addictive multiplayer modes are clearly the high points of the game. Also, the appearance of long-awaited vehicles and weapons pleased a vast majority of players and critics. The new multiplayer options, such as Forge, were also well received, with most people agreeing that they add an interesting twist to the multiplayer concept.

As popular as Halo 3 is, though, it's not without fault. The main point of contention is that Halo 3 doesn't take full advantage of the Xbox 360's graphics capabilities. Halo 2 pushed the limits of the original Xbox, and some people feel Halo 3 failed to do the same with the Xbox 360. Although the graphics are quite good, some critics agree that the game doesn't look as good as it could have.

Another source of criticism is the length of the campaign mode. It takes anywhere from 10 to 15 hours to beat the game, which some people feel is too short. The campaign mode also suffers from the same artificial intelligence problems that the previous titles had. The enemies handle themselves well, but the allies fighting with you seem to lose track of their goal, especially when operating vehicles. It's usually best to drive the vehicles yourself, rather than let the computer-controlled character drive.

Despite the criticism, the solid story and game play easily overshadow these minor imperfections. The popularity of Halo 3 isn't likely to suffer because of a very small percentage of negative reviews. The sales statistics show that within the first 24 hours after its release, Halo 3 easily became the most successful installment of the Halo saga.

For lots more information on Halo 3 and related topics, check out the links on the next page.

A point of controversy among many players of Halo 3 is the infamous eighth level. People feel the sheer number of enemies makes the game too difficult to complete. Others disagree, claiming they've had no problems completing the level.

Up Next
Halo History
Explore More 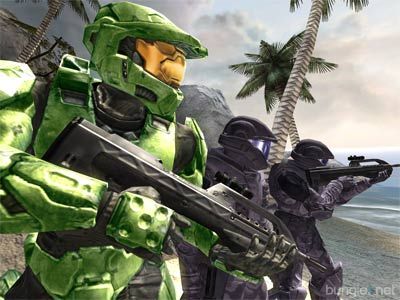