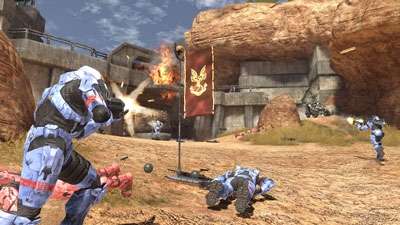 The multiplayer function in Halo 3 works seamlessly through the Xbox Live system. As many as 16 people can play in a match at one time. This is perfect for large, objective-oriented team matches. Players can choose to participate in ranked or unranked games. The Xbox Live system matches players based on their experience, making the playing field for each match fair for everyone. Multiplayer also takes advantage of Xbox Live's headset capabilities, which allows members on each team to communicate to each other via voice chat. This is useful in matches that involve proper coordination in order to accomplish an objective.

­One of the most interesting features in Halo 3 is the new Forge function. Forge allows users to manipulate the placement of objects, such as weapons and vehicles, on a particular map. A player can move just about anything that exists in the environment. Users can switch to the Forge editing mode at any time during game play and change the attributes and placement for a particular object. For example, someone can change the location of where players spawn after each kill.

The number of objects that can be placed on a single map is limited, so players have a credit system to help manage the number of objects they can use. Each object represents one credit, so when all of the credits are spent, no other objects can be used. Players can regain credits by removing objects from the map.

The endless map configurations Forge allows you to create can make for a unique multiplayer experience. The virtual world around you is constantly changing due to the ability to alter the placement of objects during a match. This makes matches interesting because the placement of weapons can change at any time. With the File Share system, you can save map configurations and share them with friends. Forge puts multiplayer gaming on a completely new level.

The big question with all of these new features is whether Halo 3 lives up to the hype. We'll take a look at some of the criticisms and shortcomings of Halo 3 in the next section.