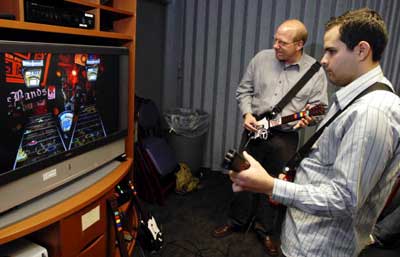 On March 14, 2008, Chris Chike was transformed from mere mortal to a rock god. The 16-year-old from Rochester, Minn., snatched the "Guitar Hero III" world record for the highest score on a single song with 840,647 points earned on the track "Through Fire and Flames." During the performance, Chike stared intently at the screen, as though possessed by the spirit of rock 'n' roll while fans and media crowded around him. His fingers whizzed across the fret buttons as his thumb gyrated up and down on the strum bar. At the end of the song, the Guitar Hero replied succinctly, "You Rock."

Interestingly, the half a million YouTube hits of Chike's accomplishment pales in comparison to the 7.4 million views of "Conrad the Great" and the 4 million of 9-year-old Ben Eberle battling the same song. Indeed, the prevalence of Guitar Hero-related videos on YouTube -- and the astounding number of people who have watched them -- perhaps represents the most solid proof of the cultural obsession with this game. Bars now host Guitar Hero nights, and many a partygoer has joined a hypnotized throng of Guitar Hero addicts. The message board on the official Web site recorded more than 111,000 comments about the release of "Guitar Hero III." ScoreHero.com now allows players to publish their own scores to see how they match up to the rest of the world.

Then, there are the tournaments. If you live in a large metropolitan area, chances are, there's a Guitar Hero tournament scheduled nearby. RedOctane, the Guitar Hero creators, sponsors a number of tournaments through Beaguitarhero.com. Some tournies are for pure competition, while others may have charity tie-ins. If anything, these events take the winners beyond virtual victory and put them in front of real people. In this sense, tournaments may be the closest Guitar Hero prodigies get to true rock 'n' roll fame.

With the success of Guitar Hero and its rival Rock Band, rhythm-based video games have set a new standard for entertainment. Rockers of the world, rejoice.

For more information about Guitar Hero, check out the links below.

Although much of Guitar Hero's appeal comes from the fact that it's incredibly simple to pick up and play, there are some who aren't feeling the vibe. In fact, that viral appeal is part of the maddening frustration that can happen when Guitar Hero takes over a space like a bad smell. Guitar Hero showboats can also ruin the fun for newbies, watching with cocky grins while someone struggles through "Slow Ride" by Foghat on the easy setting.

Guitar purists also argue that people should spend time learning real guitar, rather than wasting hours becoming proficient on a piece of plastic. Since Guitar Hero skills often don't translate to real guitars, some feel the video game is a cheap rip-off of reality.

At the end of the day, Guitar Hero is a toy meant to entertain. It's up to you whether you'll jam along or pass the guitar.