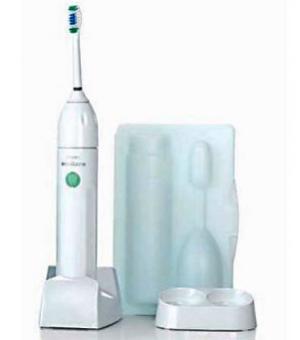 ­ Unless you are particularly organized and good with tie wrap, you probably have a few dusty power cord tangles around your home. You may have even had to follow one particular cord through the seemingly impossible snarl to the outlet, hoping that the plug you pull will be the right one. This is one of the downfalls of electricity. While it can make people's lives easier, it can add a lot of clutter in the process.

For these reasons, scientists have tried to develop methods of wireless power transmission that could cut the clutter or lead to clean sources of electricity. While the idea may sound futuristic, it isn't particularly new. Nicola Tesla proposed theories of wireless power transmission in the late 1800s and early 1900s. One of his more spectacular displays involved remotely powering lights in the ground at his Colorado Springs experiment station.

Tesla's work was impressive, but it didn't immediately lead to widespread, practical methods for wireless power transmission. Since then, researchers have developed several techniques for moving electricity over long distances without wires. Some exist only as theories or prototypes, but others are already in use. If you have an electric toothbrush, for example, you probably take advantage of one method every day.

­The wireless transmission of energy is common in much of the world. Radio waves are energy, and people use them to send and receive cell phone, TV, radio and WiFi signals every day. The radio waves spread in all directions until they reach antennae that are tuned to the right frequency. A similar method for transferring electrical power would be both inefficient and dangerous.

For example, a toothbrush's daily exposure to water makes a traditional plug-in charger potentially dangerous. Ordinary electrical connections could also allow water to seep into the toothbrush, damaging its components. Because of this, most toothbrushes recharge through inductive coupling. See the next page to learn more about how inductive coupling works. 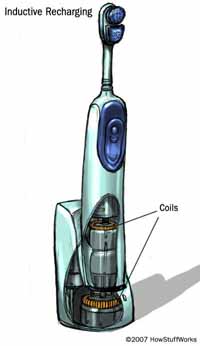 An electric toothbrush's base and handle contain coils that allow the battery to recharge.

Inductive coupling uses magnetic fields that are a natural part of current's movement through­ wire. Any time electrical current moves through a wire, it creates a circular magnetic field around the wire. Bending the wire into a coil amplifies the magnetic field. The more loops the coil makes, the bigger the field will be.

If you place a second coil of wire in the magnetic field you've created, the field can induce a current in the wire. This is essentially how a transformer works, and it's how an electric toothbrush recharges. It takes three basic steps:

You can use the same principle to recharge several devices at once. For example, the Splashpower recharging mat and Edison Electric's Powerdesk both use coils to create a magnetic field. Electronic devices use corresponding built-in or plug-in receivers to recharge while resting on the mat. These receivers contain compatible coils and the circuitry necessary to deliver electricity to devices' batteries.

A newer theory uses a similar setup to transmit electricity over longer distances. We'll look at how it works in the next section. 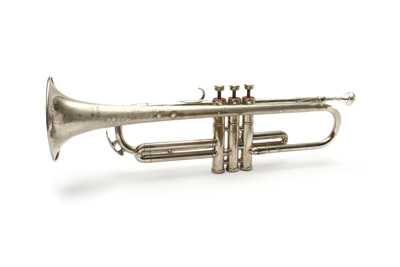 Household devices produce relatively small magnetic fields. For this reason, chargers hold devices at the distance necessary to induce a current, which can only happen if the coils are close together. A larger, stronger field could induce current from farther away, but the process would be extremely inefficient. Since a magnetic field spreads in all directions, making a larger one would waste a lot of energy.

In November 2006, however, researchers at MIT reported that they had discovered an efficient way to transfer power between coils separated by a few meters. The team, led by Marin Soljacic, theorized that they could extend the distance between the coils by adding resonance to the equation.

Research at MIT indicates that induction can take place a little differently if the electromagnetic fields around the coils resonate at the same frequency. The theory uses a curved coil of wire as an inductor. A capacitance plate, which can hold a charge, attaches to each end of the coil. As electricity travels through this coil, the coil begins to resonate. Its resonant frequency is a product of the inductance of the coil and the capacitance of the plates.

As with an electric toothbrush, this system relies on two coils. Electricity, traveling along an electromagnetic wave, can tunnel from one coil to the other as long as they both have the same resonant frequency. The effect is similar to the way one vibrating trumpet can cause another to vibrate.

As long as both coils are out of range of one another, nothing will happen, since the fields around the coils aren't strong enough to affect much around them. Similarly, if the two coils resonate at different frequencies, nothing will happen. But if two resonating coils with the same frequency get within a few meters of each other, streams of energy move from the transmitting coil to the receiving coil. According to the theory, one coil can even send electricity to several receiving coils, as long as they all resonate at the same frequency. The researchers have named this non-radiative energy transfer since it involves stationary fields around the coils rather than fields that spread in all directions.

According to the theory, one coil can recharge any device that is in range, as long as the coils have the same resonant frequency.

The MIT team's preliminary work suggests that this kind of setup could power or recharge all the devices in one room. Some modifications would be necessary to send power over long distances, like the length of a building or a city. The team is making progress -- in June 2007, the MIT team published a paper detailing a successful demonstration of their prototype. They used resonating coils to power a light bulb over a distance of about seven feet (two meters) [Source: PhysOrg].

Other wireless power theories involve enormous distances -- like from space to the Earth. We'll look at those next.

Other Power for Unmanned Planes

NASA has also developed long-distance power sources for unmanned planes. Scientists at Marshal Space Flight Center used an invisible, infrared laser to activate photovoltaic cells on a small airplane. The photovoltaic cells -- essentially solar cells -- converted the light to electricity. A similar system could also power devices that climb a space elevator's tether. However, systems like this require a direct line of sight between the laser and the solar cells. 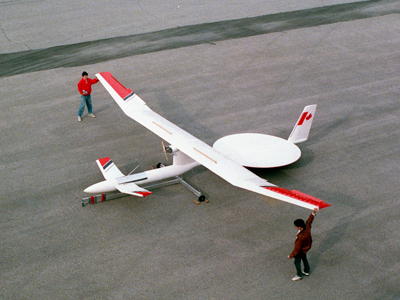 Whether or not it incorporates resonance, induction generally sends power over relatively short distances. But some plans for wireless power involve moving electricity over a span of miles. A few proposals even involve sending power to the Earth from space.

In the 1980s, Canada's Communications Research Centre created a small airplane that could run off power beamed from the Earth. The unmanned plane, called the Stationary High Altitude Relay Platform (SHARP), was designed as a communications relay. Rather flying from point to point, the SHARP could fly in circles two kilometers in diameter at an altitude of about 13 miles (21 kilometers). Most importantly, the aircraft could fly for months at a time.

The secret to the SHARP's long flight time was a large, ground-based microwave transmitter. The SHARP's circular flight path kept it in range of this transmitter. A large, disc-shaped rectifying antenna, or rectenna, just behind the plane's wings changed the microwave energy from the transmitter into direct-current (DC) electricity. Because of the microwaves' interaction with the rectenna, the SHARP had a constant power supply as long as it was in range of a functioning microwave array.­

­ Rectifying antennae are central to many wireless power transmission theories. They are usually made an array of dipole antennae, which have positive and negative poles. These antennae connect to semiconductor diodes. Here's what happens:

Other, longer-range power transmission ideas also rely on rectennae. David Criswell of the University of Houston has proposed the use of microwaves to transmit electricity to Earth from solar power stations on the moon. Tens of thousands of receivers on Earth would capture this energy, and rectennae would convert it to electricity.

Stations on Earth can receive energy from the moon via microwaves.

Microwaves pass through the atmosphere easily, and rectennae rectify microwaves into electricity very efficiently. In addition, Earth-based rectennae could be constructed with a mesh-like framework, allowing the sun and rain to reach the ground underneath and minimizing the environmental impact. Such a setup could provide a clean source of power. However, it does have some drawbacks:

­ While scientists have built working prototypes of aircraft that run on wireless power, larger-scale applications, like power stations on the moon, are still theoretical. As the Earth's population continues to grow, however, the demand for electricity could outpace the ability to produce it and move it around. Eventually, wireless power may become a necessity rather than just an interesting idea.

Read on for lots more information about electricity, wireless power and related topics.

Thank you to Josh Senecal for his assistance with this article.­